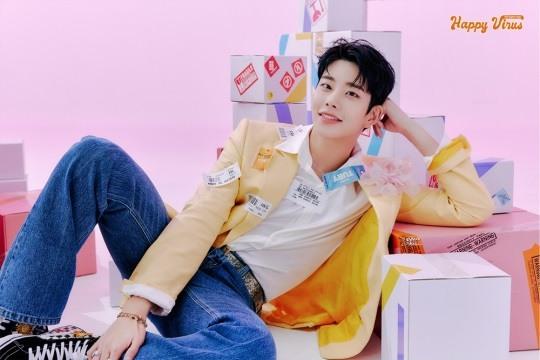 ASTRO’s MJ impresses with his solo release, “Get Set Yo”, entering Billboard’s Hot Trending Songs chart with the funky track.

ASTRO’s MJ proves his worldwide popularity with his solo debut track, “Get Set Yo”. The artist entered at position 11 on the American Billboard Hot Trending Songs chart, an impressive feat for his first individual project. “Get Set Yo” featuring Kim Taeyeon, delivers MJ’s lovely vocals and musicality in the trot genre track.

Billboard’s newly established Hot Trending Songs chart ranks the real-time positions of the most frequently mentioned songs on Twitter daily and weekly. The chart is a home for many songs from emerging and renowned worldwide artists. MJ’s accomplishment is particularly meaningful considering its unusually high ranking for a trot-genre song.

The song highlights the singer’s refreshing atmosphere and suave singing skills. Furthermore, other artists such as ASTRO’s JinJin and MONSTA X’s Kihyun and I.M showed their support, participating in the “Happy Virus” challenge on SNS platforms. The “Get Set Yo” trend continues drawing attention to the fun track.

After his solo debut, MJ also charmed fans during various broadcast appearances such as on SBS MTV’s The Trot Show. The artist will also appear on KBS 1TV’s Hometown Report, spreading his energizing appeal.

Through his music and reality appearances, MJ will continue spreading the “Happy Virus” as his album name reflects.

MJ continues boasting his all-rounder talents through individual and group schedules including singing, acting, and entertaining. Moreover, he will celebrate the end of the year by performing in the musical for Jack the Ripper.