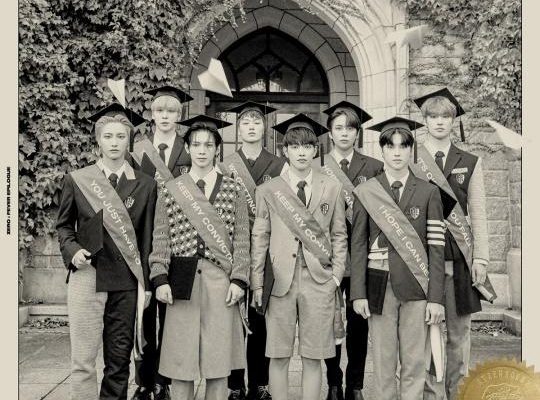 ATEEZ reveals the title of their newest track, donning graduation caps to commemorate the end of their “FEVER” series. 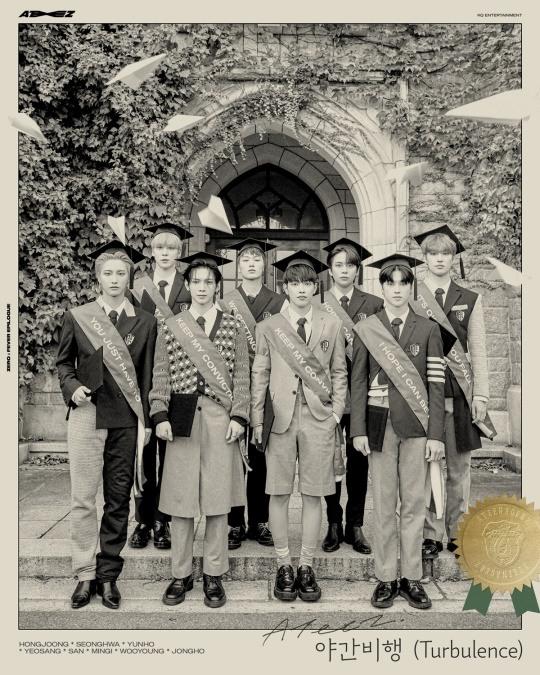 The photo shows a black-and-white image of ATEEZ standing in a line. In addition to their graduation caps, the members also hold diplomas, signalling the end of an era.

ATEEZ also wears banners reading a variety of messages with keywords visibly shown, including ‘conviction’, ‘hope’, and ‘fall’. The cryptic banners increase the mystery regarding the group’s next concept and the developments of their storyline.

Furthermore, the sight of the concept image raises fans’ interest regarding what other hints will appear in the group’s latter teasers.

Keen fans will note the same school building in the background as the one seen in their first “FEVER” series images. As such, ATEEZ reinforces their ‘epilogue’ stage even more.

The title track name, “Turbulence” appears at the bottom of the image. The word refers to the feeling of upheaval, only adding to the suspense of what themes the group may explore with their next album.

ATEEZ also recently released their promotional scheduler for this comeback.

The group will deliver a variety of content to fans including group and solo concept images. They will also unveil two music video teasers and a highlight medley shortly before the album’s release.

Meanwhile, ATEEZ will make their comeback with ZERO: FEVER EPILOGUE on December 10 at 6 PM KST.