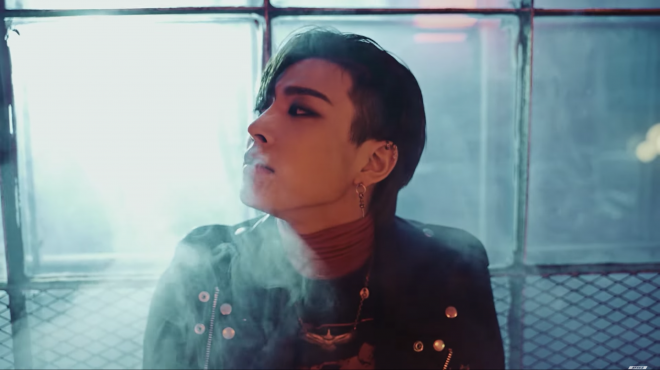 ATEEZ’s leader Kim Hongjoong impresses all with his cover of “Numb” by the world-renowned rock band, Linkin Park, catching the eye of the original artist!

Recently, ATEEZ’s leader Kim Hongjoong covered “Numb”, a song by the global rock band Linkin Park. This marked the fifth cover of Hongjoong’s personal cover series on the group’s YouTube channel. The artist was praised by fans of ATEEZ and of Linkin Park alike for his homage to the original track in addition to his creative Korean additions.

During Hongjoong’s cover, the artist displayed a powerful rock star impression, donning smokey makeup, black leather, and a half-skirt over ripped jeans. Moreover, the artist caught listeners’ attention with his personal arrangement and written rap for the beloved rock song. Hongjoong later explained to fans in a VLIVE that he mulled over the idea for the cover since last year.

ATEEZ received positive interactions with various global artists on their SNS platforms before. Recently, Seonghwa recommended Delta Goodrem’s track “Only Santa Knows” to fans. In response, the artist sent her affectionate thanks for sharing her music.

The group continues to show their appreciation for other artists, and music more generally. Seen through personalized, creative renditions, passionate covers, and SNS playlists, ATEEZ impresses both fans and original artists. As such, the group reiterates their strong musical identities, while paying their respect to those that inspire them.

Meanwhile, ATEEZ members continue providing a range of personal content for fans despite their busy schedules. This includes ASMR, cooking, OST covers, and even experiment videos. Fans can enjoy a variety of content on their official YouTube channel.