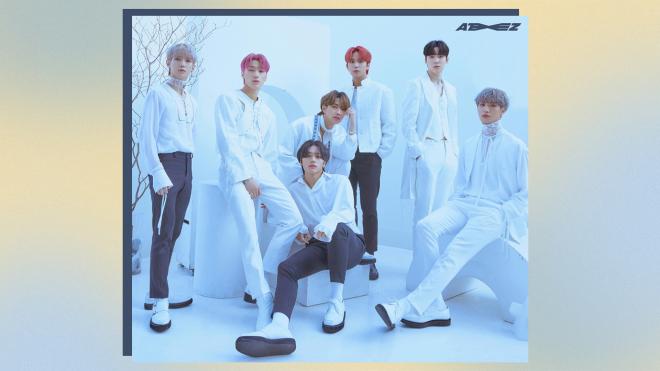 ATEEZ will take fans Into The A to Z with their first full original Japanese album since debuting!

ATEEZ continues to prove their worldwide demand, storming the global music market with their first original full Japanese album, Into The A to Z. The move shocked fans considering the group’s jam-packed schedule this month. Not only will the group make their comeback on March 1 with their sixth Korean mini-album, but other members are also filming the upcoming drama Imitation, while ATEEZ as a whole will participate in Mnet’s Kingdom: The Legendary War in April.

ATEEZ shows no signs of slowing their schedules, responding to the eager calls sent by loyal fans across the world. Their newest announcement for their Japanese album thrilled fans with its initial concept image.

The members shined in white outfits, setting a dream-like atmosphere in the whimsical photo shoot. The pure charisma of the members is a trait easily missed due to their tendency to stick to more intense concepts. However, with this upcoming project, the members show there is no concept they cannot carry gloriously.

ATEEZ made their official debut in Japan with TREASURE EP. EXTRA: Shift The Map during December 2019. The album was greeted with an enthusiastic response, ranking third on Oricon’s Daily Album Chart. Meanwhile, their follow-up mini-album Treasure EP. Map to Answer dropped in February 2020 and soared to the top of Oricon’s Daily Album rankings as well.

ATEEZ’s first full-length original Japanese album, Into the A to Z, will include ten tracks. This consists of Japanese versions of songs such as “Say My Name”, “UTOPIA”, “ANSWER”, “INCEPTION”, and “WONDERLAND”. The album will also feature a new Japanese title, “Still Here”.

As the group continues to make strides throughout the first quarter of the year, it’s clear that their career momentum shows no signs of stopping. The worldwide demand for the group only continues to skyrocket, and ATEEZ greets their fans enthusiastically in return.

Into The A to Z releases March 24. Meanwhile, ATEEZ will make their comeback on March 1 at 6 PM KST with ZERO: FEVER Part.2.