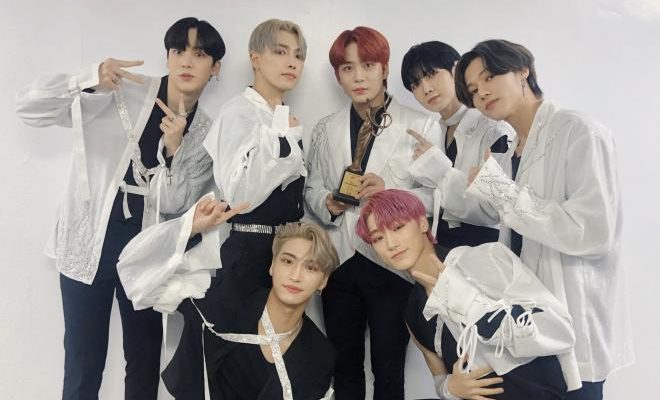 ATEEZ Win Their First-Ever Bonsang During The Seoul Music Awards

ATEEZ demonstrate their flourishing success during the Seoul Music Awards, taking home their first-ever main prize during the ceremony.

ATEEZ brought home their first main prize during the 30th High1 Seoul Music Awards, illustrating their rising power within the K-Pop industry. The illustrious ceremony acknowledges the best and brightest among K-Pop, awarding them for their achievements. Their first bonsang does not come as a surprise, rather a deserved inevitability.

ATEEZ’s demanding performances coupled with the support of their loyal fandom, ATINY, makes for a powerful combination, resulting in various accolades.

The night was full of gifts for ATINY. ATEEZ’s main vocalist, Jongho, also appeared in a special collaboration stage “Once In A Lifetime”. The member displayed his admirable skills yet again, further proving his image as one of the most powerful singers in the industry.

Furthermore, during the Seoul Music Awards, ATEEZ displayed their star-charisma once again, delivering two powerful stages. The stage titled, “From the New World”, intrigued fans by possibly hinting towards development in their musical worldview for upcoming projects. During this performance, the group thrilled by bringing back the fan-favorite track “UTOPIA” from their third EP, TREASURE EP.3: One To All.

Upon receiving the main award during the Seoul Music Awards, ATEEZ sent their heartfelt thanks to fans. They stated, “It’s meaningful because we have ATINY who walked with us until we came here. Thank you for letting us be here”.

Additionally, they shared their endearing love for one another. They also sent their warmest greetings to their member, Mingi, who is currently on leave for health reasons. In sum, the touching speech celebrated the dedication of their fans, and of their tight-knit team of eight.

Meanwhile, ATEEZ recently gained immense attention within the industry, achieving many awards. This included a prize at the 2020 MAMA as well as the 2020 The Fact Music Awards, followed by the 10th Gaon Chart Music Awards.

Now, after receiving a prize during the Seoul Music Awards, expectations are high for what achievements the group will surely claim this year.