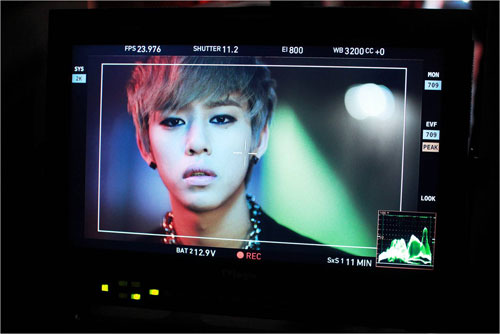 B.A.P‘s Daehyun revealed a spoiler image on January 9th through his Twitter. The photo revealed a monitoring screen for the film set of Daehyun who is having a subtle expression staring towards the camera. This resulted his fans to title the photo as ‘Subtle Daehyun’.

Daehyun’s spoiler is a scene of the music video for B.A.P’s Sound of Rain (빗소리) which will be released on January 15th. The song is being released ahead of their upcoming mini album. Sound of Rain’s music video was created by director Hong Wonki who worked on music videos for many popular artists such as Girls’ Generation, Seo Taiji, BEAST and SECRET. As the director has solid experience with producing music videos, many people have high anticipations on how the director will capture the energetic B.A.P in the new piece.

Sound of Rain is said to be an emotional hip-hop song, accompanied with acoustic guitar to the addition of a hip-hop rhythm. As B.A.P has always shown powerful dynamic stages with No Mercy and Crash, people are looking forward to the different stage they will prepare this time.