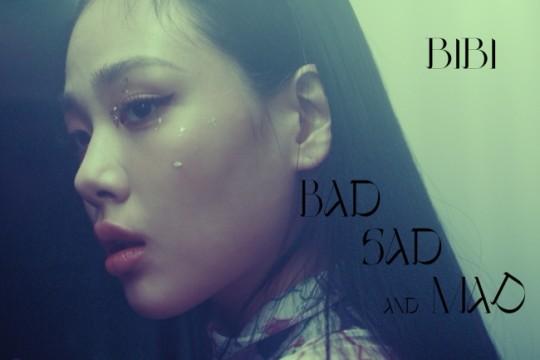 BIBI To Make Her Comeback This Month With A New EP

Soloist BIBI to make her comeback with a brand new EP releasing April 28!

BIBI will make a highly awaited comeback, releasing a new extended play album on April 28. The EP will focus on the artist’s talent for storytelling. BIBI participated in all aspects of the album production, including concept planning, lyric-writing, music composition, and styling.

The project will reveal BIBI’s multitude of creative talents. Furthermore, part of a new song was released in a new teaser titled, “BAD SAD AND MAD”. The artist intrigued with a short, atmospheric listen of her new project. Along with her clear vocals, BIBI portrayed a dazed, dreamy expression amidst a hazy atmosphere.

The short teaser raised curiosity for the sound and stories the artist will reveal in the upcoming album release.

Furthermore, excitement is high for her comeback as it has been two years since BIBI released her first EP, The Manual For People Who Want To Love, in June 2019.

Making Waves In The Industry

Since BIBI debuted, the singer gained a strong fanbase for her sensual style and unique vocal color. Furthermore, the artist worked actively in a variety of fields including music, broadcasting, entertainment, film and advertising. As such, the soloist continues building a strong reputation for her many talents in the brief time since she began her career.

Her hit tracks include “BINU”, “KAZINO”, and “she got it”. Through such works, BIBI carved her distinct identity in the music industry, depicting her abilities to work in a wide range of genres such as hip-hop, R&B, and ballads.

Additionally, the singer was selected as part of Spotify’s “2020 Top 5 Most Streamed RADAR Korea Artist”, displaying her global appeal. She also participated as a headliner artist for “From Milan With Love: Next Gen”, an overseas concert hosted by AC Milan and Roc Nation.

Now, the artist will continue exhibiting her worldview through the release of her newest EP. BIBI will make her comeback on April 28 at 6 PM KST.