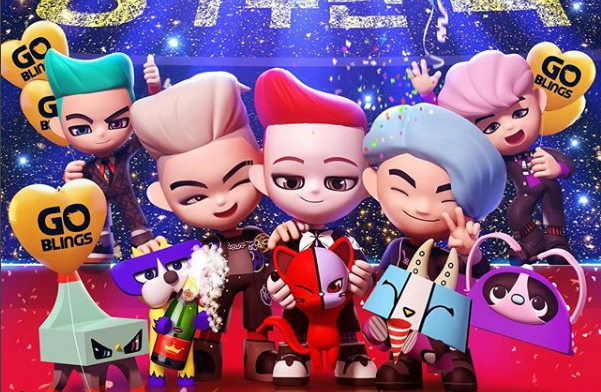 Big Bang and their pets, the GO Blings, will entertain fans through new webtoon series.

Big Bang’s own webtoon series have been released on July 20th in Korea, US and Japan. The series, GO Blings, was co-produced by YG Entertainment and KT to show the daily lives of the band members along with interactions with their goblin pets, the GO Blings. The pets were modeled after each Big Bang member and they are the stars of this series.

Kirin, the artist behind GO Blings, is a huge Big Bang fan and delicately incorporated the individual characteristics and personalities of each member into their respective pets. For example, GD’s pet, Shu, is a cat goblin designed as a shoe to give tribute to the idol’s shoe collecting hobbies as well as his fondness for cats. The Instagram account of GO Blings has their profiles as well as cute and hilarious portrayals of the idols themselves. It has been active since early 2017.

The series will have a total of 12 episodes and will be posted every week starting July 20. It is distributed in the United States through Tapas, the largest English webtoon and web novel platform in the US with over 28,000 authors and 40,000 works on the website.

In Japan, it will be broadcasted through Pikoma, the most popular webtoon site in Japan, with its first appearance on the Japanese market in April 2016.

YG has made the series with the intention to provide pleasure to the fans who wants to see Big Bang in another platform by utilizing GO Blings in various fields. The GO Bling’s official Instagram account provides ample content to delight fans around the world.

Watch the series’ teaser below!

Hellokpop, as an independent Korean entertainment news website (without influence from any agency or corporation), we need your support! If you have enjoyed our work, consider to support us with a one-time or recurring donation from as low as US$5 to keep our site going! Donate securely below via Stripe, Paypal, Apple Pay or Google Wallet.
FacebookTwitter
SubscribeGoogleWhatsappPinterestDiggRedditStumbleuponVkWeiboPocketTumblrMailMeneameOdnoklassniki
Related ItemsBIG BANGDaesungG-dragonGO BlingsSeungriT.O.PTaeyang
← Previous Story Dreamcatcher Achieves Photo Book Crowdfunding Project Goal In An Hour
Next Story → SF9 To Comeback With A Darker Concept With 5th Mini Album