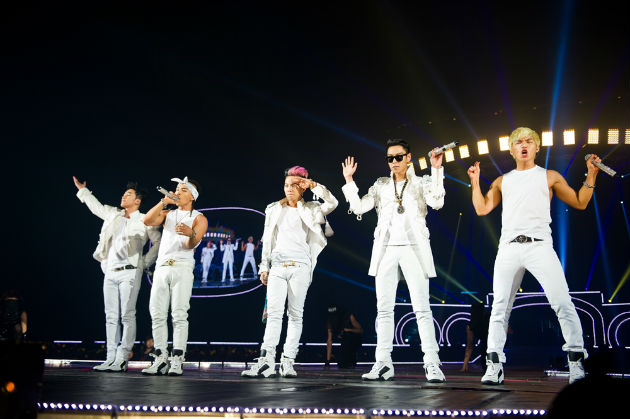 BIGBANG has flown three and a half times around the world?

After traveling around the world approximately three and a half times, and with their final stop in Osaka, Japan last weekend, BIGBANG successfully completed their overseas concert tour.

Yes, not only did their world tour, BIGBANG ALIVE GALAXY TOUR, successfully open in each city, but it also recorded every seat in each city as being sold out. Visiting America, European and other Asian countries, BIGBANG flew 144,689 kilometers, which is said to equal the distance of going around the world three and half times.

Fans were excited to hear about the group’s schedule for the new year and are highly anticipating their new activities to come. G-Dragon announced that he will be touring Japan at the three domes, which is said to be a first from a solo Korean artist.  Taeyang will be making a comeback with his solo album in 2013.  TOP is currently filming for a movie titled Schoolmate (동창생), which is said to be 90% finished with filming.  Daesung will be releasing a solo album in Japan and holding a solo concert as well.  Lastly, Seungri is said to be active in Korea with a drama.  It looks like BIGBANG will be a big act in 2013.

Through the world tour that they just wrapped up, BIGBANG definitely showed the world media their potential and popularity. From January 25 through January 27 BIGBANG will be holding a final concert in Seoul, which will serve as the finale to their tour.