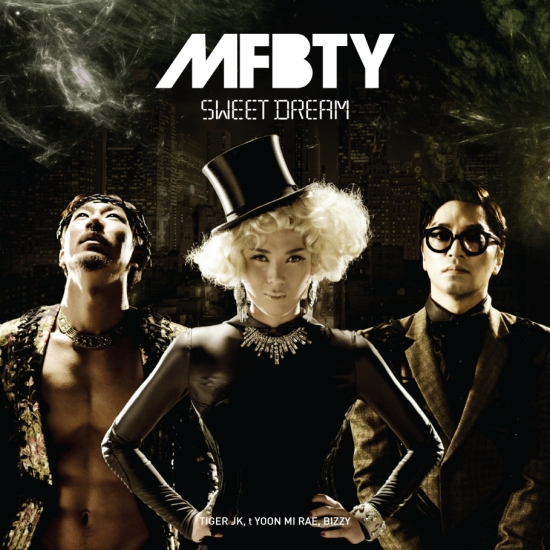 Bizzy, Tiger JK, and Yoon Mi-Rae (Tasha), three of Korea’s best rap/hip hop artists, have joined together to create a unique group project under the moniker of ‘MFBTY‘, which stands for ‘My Fans Better Than Yours‘ (or perhaps, as track  number 1 on the group’s single album suggests, ‘M. F’ing. Bizzy Tiger Yoonmirae.‘)

MFBTY’s single album and its accompanying music video, Sweet Dream, were released at noon (KST) on Monday, January 21, to an already worldwide and thrilled MFBTY fan-base. Unbeknownst to most in the usual K-Pop fandom, this fan-base, comprised of fans who call themselves “unnies” and frequent Twitter in different locales as “@MFBTYso-and-so,” has apparently been quietly and steadily building for many months. Where this mysterious fan-base came from is anyone’s guess (and nobody at Jungle Entertainment is saying anything). As of the writing of this article, the Sweet Dream music video on YouTube had amassed over 27,000 views between its two YouTube channels at CJENMMUSIC & JUNGLEMFBTY.

The foundation of the title track, Sweet Dream (track  number 2 on the album), is a solid beat by electronica producer DJ Smell (SMELLS).  The song itself is composed of a surprisingly entertaining variety of genres, including pop, R&B, rap and hip-hop. The Sweet Dream music video envelops the viewer in a tidal wave of symbolism that at first threatens to overwhelm the senses, but then somehow still manages to suck you into what feels more like a nightmare than a sweet dream.  Whatever the heck it is, it’s mesmerizing.

The other two tracks on the single album also work extremely well. Track number 1, BizzyTigerYoonmirae (MFBTY), is my favorite as it tops !llmind’s minimalistic hip hop beat with some back-to-the-roots superstar rapping that doesn’t hesitate to give the world the finger. An awesome track that leaves you wanting more even after it ends.  Track  number 3, cleverly titled Sweet Dream (SMELLS Like Money Mix) is a dance mix of the title track that’s sure to be popular in dance clubs globally — if marketed correctly.  Sure smells like money to me.

The album is available on all major music sales outlets across the world, including iTunes. All in all, this was an excellent first for MFBTY, which has us sort of wondering…what’s next?  We’re waiting with bated breath.

MFBTY will officially make its stage debut at MIDEM 2013’s K-Pop Night Out Showcase on January 27, in Cannes, France. So, if you’re in the area, I’d suggest you don’t miss it.  It should be a show to remember.

Check out the Sweet Dreams music video below and then let us know what you think about MFBTY in the comments.