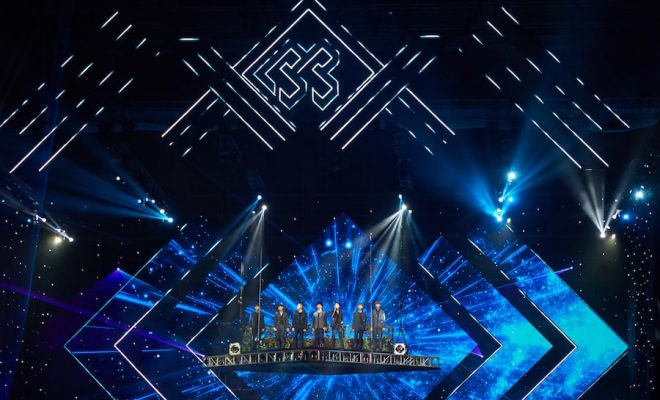 BTOB’s Eunkwang makes us even sadder as he makes it harder to bid him goodbye for the next two years.

We honestly thought we were okay, but the BTOB leader has us crying about his upcoming mandatory military enlistment yet again!

During BTOB’s This Is Us concert in Seoul on August 10, Eunkwang gave a moving performance of the classic Korean song “Letter of A Private”.

The classic ballad, originally recorded by Kim Kwang Seok, is traditionally played when a Korean man is set for his military enlistment. The song talks about one’s inner feelings about having to leave his friends and family behind as he sets off for military training.

Eunkwang explained that he struggled to come up with a song to sing for the concert. In the end, he had to ask himself “what song do I really want to sing right now?”, and chose to perform “Letter of A Private” as his solo stage.

He also tearfully poured his heart out to the crowd, who reportedly reached the count of 12,000 in attendance.

“It’s the first concert, so I didn’t want to cry. A lot of people contacted me when the articles about my enlistment went out, so I thought ‘maybe I lived well.’ As we grew and gratefully gained popularity, we will repay everyone with good music and performances,” Eunkwang assured.

“I am also looking forward to when I’m in the military. I’m curious about what BTOB will be like without me and how our music will change,” he said.

Eunkwang’s inner leader came out too as he encouraged fans to support BTOB in his absence. “We have a wide spectrum of music. Even when I am not there, I hope you can enjoy BTOB’s music,” he said.

As for Eunkwang’s last request to the Melodies?

“I would like you to be there when the seven people who have been together for seven years come back together in one place,” is all that he wants.

The 2018 BTOB Time – This Is Us concert was held on August 10 at the Olympics Gymnastics Arena in Seoul. The show marked their first summer concert, and one of the last shows Eunkwang would be able to perform in before he enlists on August 21.

Are your hearts okay, Melodies? Let us know by leaving a comment below, giving us a holler on Facebook, or tweeting us at @hellokpop!