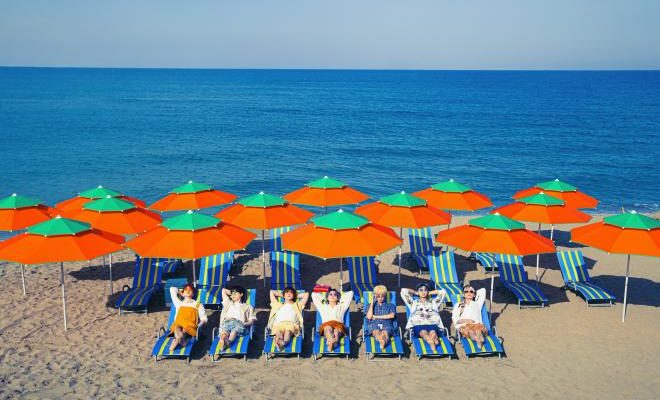 As July 9 approaches, the concept photos for “Permission To Dance” just keep coming. In version 4, it’s all sand, sea, sun, and Sonyeondan!

BTS content is being churned out so fast that fans can barely keep up! Now already on version 4 of their new concept images (how many versions are there exactly?), the popstars are depicted in their element at the beach. 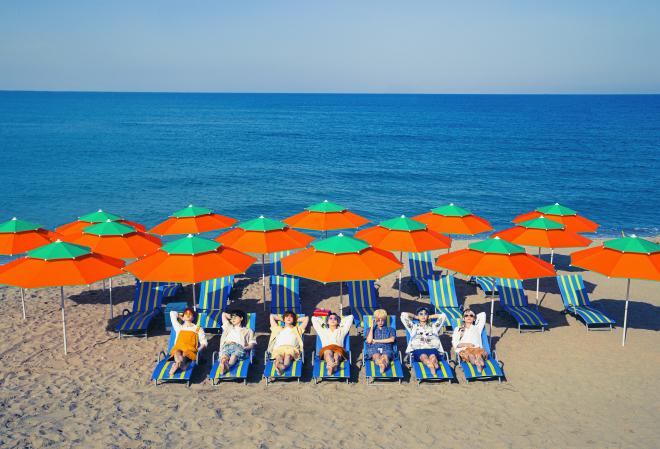 Summer is in full swing, so it’s only fitting that version 4 of the “Permission To Dance” teaser images vicariously transport us to the beach for some sand, sea, sun, and (Bangtan)Sonyeondan!

Version 3 depicted the septet playfully showcasing their fun and quirky sides at a vintage car wash. In this brand new version fresh off the press, they kick it up a notch (literally) with their feet kicked up on colorful beach chairs shaded by large parasols. 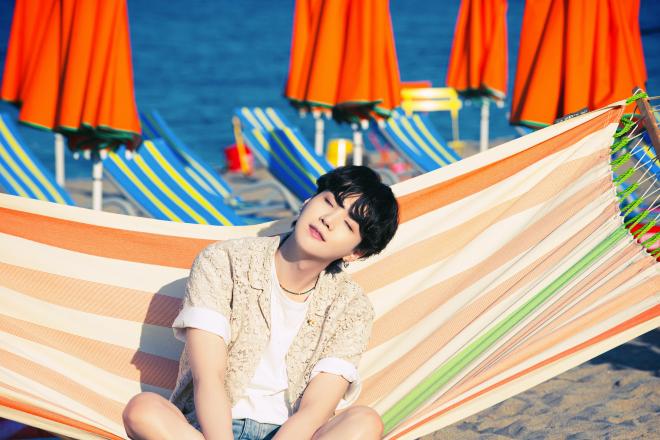 Behold, Suga soaking in all that sunlight with vigor while lounging on a vibrant hammock suspended above the sand. Sporting a gorgeous black mullet and laid-back summer attire in charming pale tones, it’s master rapper off-duty for today. 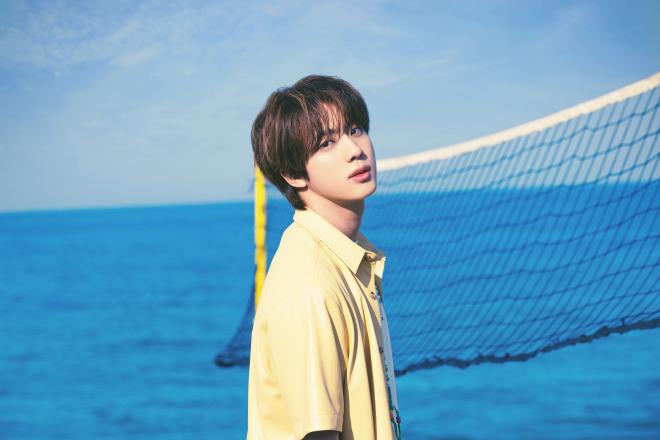 Jin poses for the camera with that signature pose of his that accentuates his friendly facial features. Donning a basic yellow shirt, the “Epiphany” singer epitomizes warm summer rays of sunshine with the infinite cerulean ocean as his backdrop. Also, we see a volleyball net. Game on, anyone? 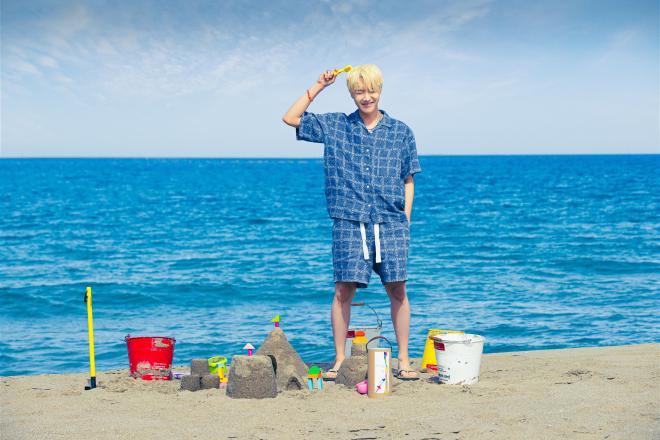 No building castles in the sky for BTS’ resident sunshine, because he’s building them right here in the sand! Equipped with buckets and shovels, there’s no doubt about it that J-Hope is ready to create a sandy masterpiece.

To top it all off, his cozy blue co-ord blends perfectly with the sea while his bright blonde locks personify the sun. Back to the Blue Side, is it? 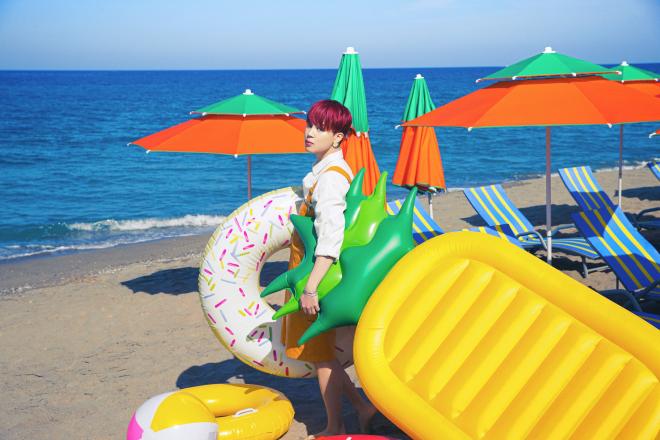 With his donut and pineapple-shaped floaties, Jimin appears to be ready to turn the ocean into his playground. Based on the “Filter” singer’s playful persona, this concept couldn’t be more perfect for him. 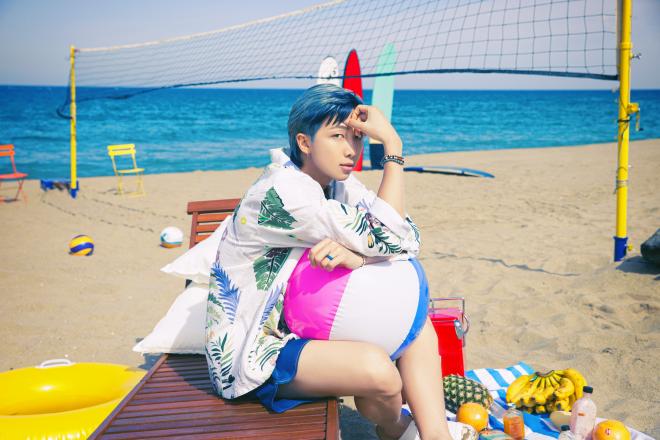 The leader (read: president) is in the house, and he brought a beach ball to complete his tropical summer aesthetic. We would also like to ask his hairstylist how they mixed that perfect shade of steel blue to paint his locks the color of cool! 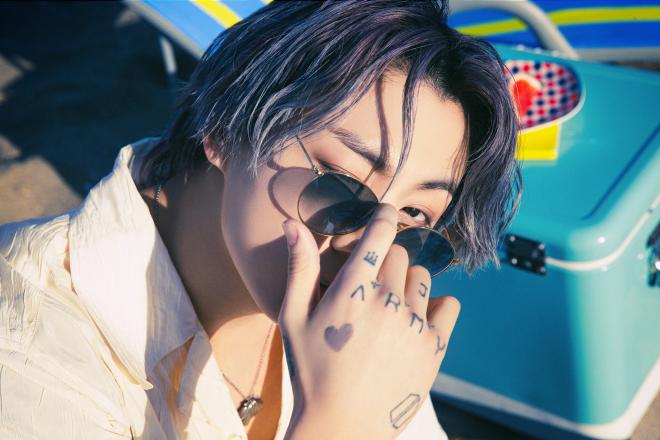 Flexing his stylish sunnies and flaunting his tattooed hand, Jungkook radiates ice blue coolness in contrast to the hot summer vibes that are baking the beach. Get it, JK. 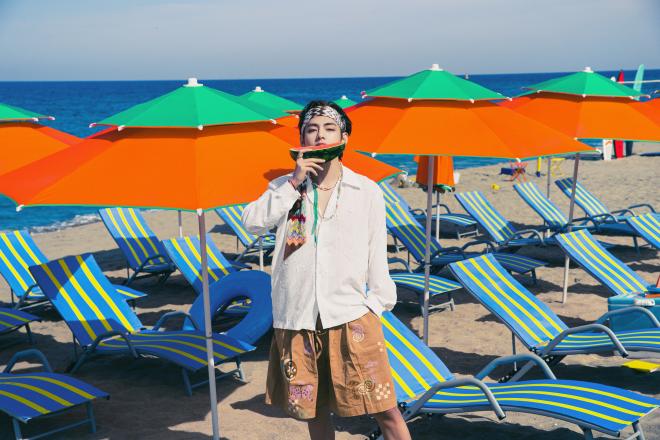 According to “Butter”, V is a cool shade stunner and he owes it all to his mother (and father). The unapologetic song lyrics match perfectly with the “Winter Bear” singer’s unique and sassy personality.

Clad in summer wear and a bandana while he munches on a watermelon, the beach is his runway. We wonder what kind of sassiness he’ll be serving up in “Permission To Dance”.