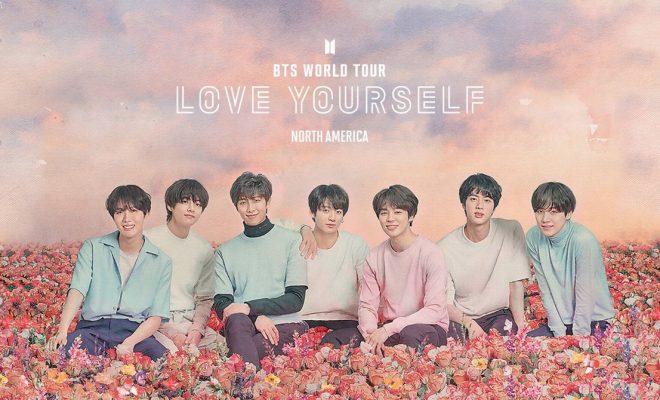 BTS Sells Out “Love Yourself” US Stadium Show Within 20 Minutes

BTS becomes the first Korean artist to hold AND sell out a stadium show in the United States!

BTS immediately sold out all 40,000 seats for their stadium show in New York’s Citi Field – marking yet another record for the South Korean group!

Despite the show being announced just two weeks before ticket sales start, the stadium still got booked to full capacity right away. In fact, all tickets have reportedly been sold within twenty minutes! This includes additional seats which they added a bit after due to the overwhelming demand.

They added more seats. My first photo was around 1:09 when I first got in, the right was about 25 mins later but I couldnt even go pass that mark. Error. Lol @BTS_twt did that pic.twitter.com/oRyS8Szvf3

BTS is set to hold a show on October 6 for their Love Yourself world tour at the renowned Citi Field stadium in New York. Citi Field is home to the major US league New York Mets and had seen performances from Paul McCartney, Jay-Z, Beyonce, Lady Gaga and other famous international artists.

The group has already hit the headlines for being the first Korean artist to ever hold a stadium show in the US with their Citi Field show. Now, they have also become the first and only Korean artists to sell out a US stadium show – and in record time as well!

Citi Field sent out a tweet an hour after the start of ticket sales to officially announce that tickets had already been sold out. The show is BTS’ final stop for the U.S. leg of their Love Yourself tour.

Thank you, #BTSArmy! Due to overwhelming demand, tickets are no longer available for the @bts_bighit show at this time. We hope to see you on Oct. 6th. pic.twitter.com/Wqd6HGVF5n

The tour will kick off in Seoul on August 25 and 26 at the main stadium of Jamsil Sports Complex – both being sold-out shows as well. It currently has announced shows in Europe, Japan, Seoul, and the U.S., with 33 performances in 16 cities as of writing.

The world tour will follow the release of BTS’ repackaged album Love Yourself: Answer on August 24. Much anticipation had already arisen for both the tour and the album, thanks to all the teasers including concept photos and the comeback trailer for the album entitled ” Epiphany”.

What are your thoughts on BTS’ recent feat? Let us know by leaving a comment below, giving us a holler on Facebook, or tweeting us at @hellokpop!