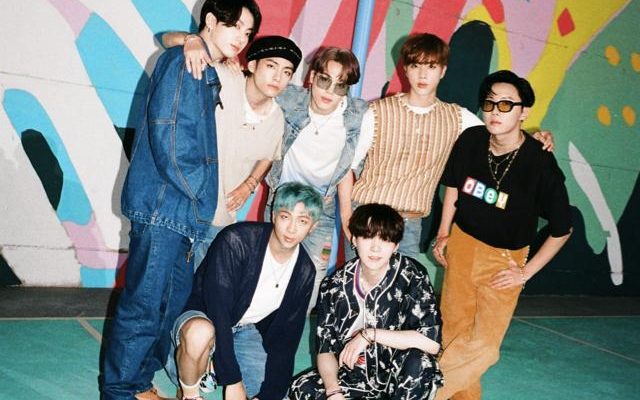 After flooding the internet with BTS’ individual “Dynamite” teaser photos, it’s the group photo that’s sweeping the fandom off its feet now!

The boys of BTS are once again being hyped up by their Amazing ARMY for the upcoming launch of their first collective English single, “Dynamite”.

Twitter, Instagram, and Facebook alike went into full fangirl mode when the solo photos of Jungkook, V, Jimin, J-Hope, Suga, Jin, and RM were released by Big Hit Entertainment. Now, its BTS’ group teaser photo that is causing all the ARMY buzz (and right on schedule too!)

There’s a certain charm to things that remind us of the old-fashioned days. Staying true to the retro vibe radiated in the solo images, the group photo depicts the seven-strong clad in ’90s vintage-Esque style while they pose on a basketball court.

The colorful abstract of the graffiti wall behind them adds to the fresh burst of enchantment. Even the quality and overall feel of the picture exudes everything retro cool.

Denim, bright stripes, bold sunnies, plus their signature charm illustrated on the teaser images, fans can already imagine the vintage magic that “Dynamite” will be (unless these photos are far from what the actual music video will look like, because, you never know, you know.)

Either way, the members are giving us an awesome new aesthetic that we’re loving at the moment, and “Dynamite” will surely be an explosion of upbeat positivity.

FacebookTwitter
SubscribeGoogleWhatsappPinterestDiggRedditStumbleuponVkWeiboPocketTumblrMailMeneameOdnoklassniki
Related ItemsBangtan SonyeondanBTSBTS DYNAMITEDynamiteMap of the Soul On:E Concert
← Previous Story DAY6’s Even of Day Reveals A Map Guiding Fans To “The Book of Us: Gluon”
Next Story → BTS Is Ready To Light Up The Stage Once Again In “Map of the Soul On:E Concert”