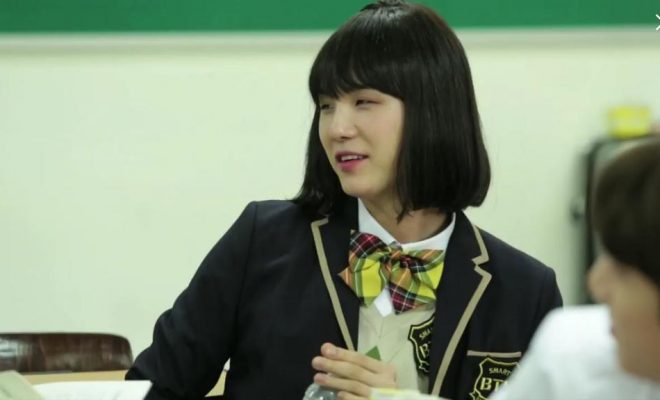 ‘Run BTS’ is back with a new crazy episode!

In this episode, the boys tried their chops in acting and creating their own skit, with the set in a high school. Each member portrayed the role of a student of various personalities.

Leader Rap Monster was a “nice but slow-witted student”. The other members poked fun at their leader’s role. “That’s so you,” said Jimin.

J-Hope, on the one hand, said the role reminded him of Rap Monster’s trainee days.

Youngest member Jungkook played the role of a tsundere or cold but kind-hearted.

Oldest member Jin picked the role of a school idol. “I am an idol and I am confident,” he declared. 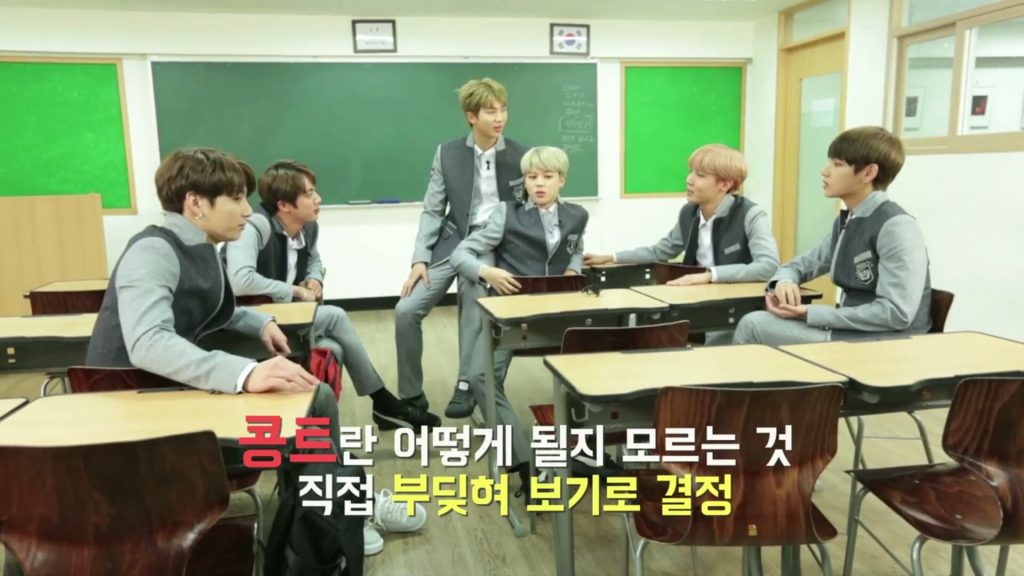 Rap Monster leads the team in discussing the flow of the skit. (Screenshot from V Live)

V was the “smartest student with a pair of round-rimmed glasses and a book”. The Hwarang actor described his character as a student, who is only into studying but falling in love with a girl.

Jimin’s role was the “classroom leader who always keep an angelic smile on his face”. Unsure on how to go about with his role, Jimin asked for his members’ suggestions.

“Just keep on smiling. I guess doing that makes him the guy with an angelic smile on his face,” said V.

However, J-Hope commented that doing so might make Jimin look stupid. 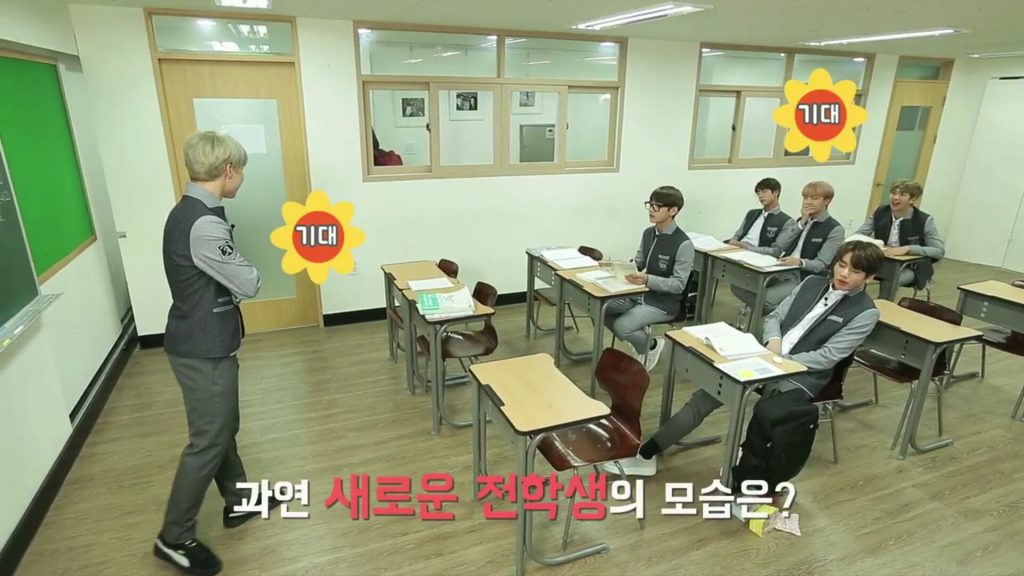 The members get into their character as they wait for Suga to come out. (Screenshot from V Live)

The “emo kid who is into literature” was portrayed by J-Hope. He said his character is a literature expert. “I wanted to look innocent, that’s what I was going for,” he added.

The role of the rose among the thorns landed on Suga, who played a female transfer student. “I am ready to play multiple characters always. It’s a must for any actors. I will show you my method of acting,” he said. 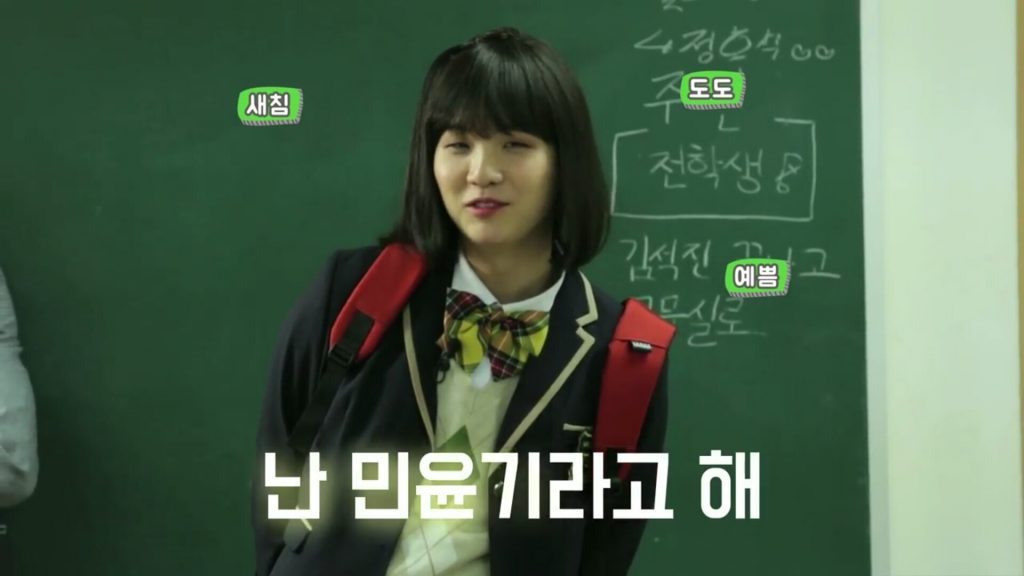 Suga is pretty and coy as Min Yoon Ji. (Screenshot from V Live)

The New Girl At BTS High

BTS’s skit revolved around six male students’ quest to win the heart of a new female student by showing off their character’s charm. Each member took on various methods to impress Suga, aka the female student.

Rap Monster showed off his aegyo and finger hearts, while V tried to tutor the coy female student. However, their efforts both failed, terribly.

Jungkook then took the baton, and tried to impress Suga with his coolness. He gave Suga his jacket, shoes, snacks, and even medicine.

Literature student J-Hope went all out with his tears (courtesy of water) as he read a poem for the female student. 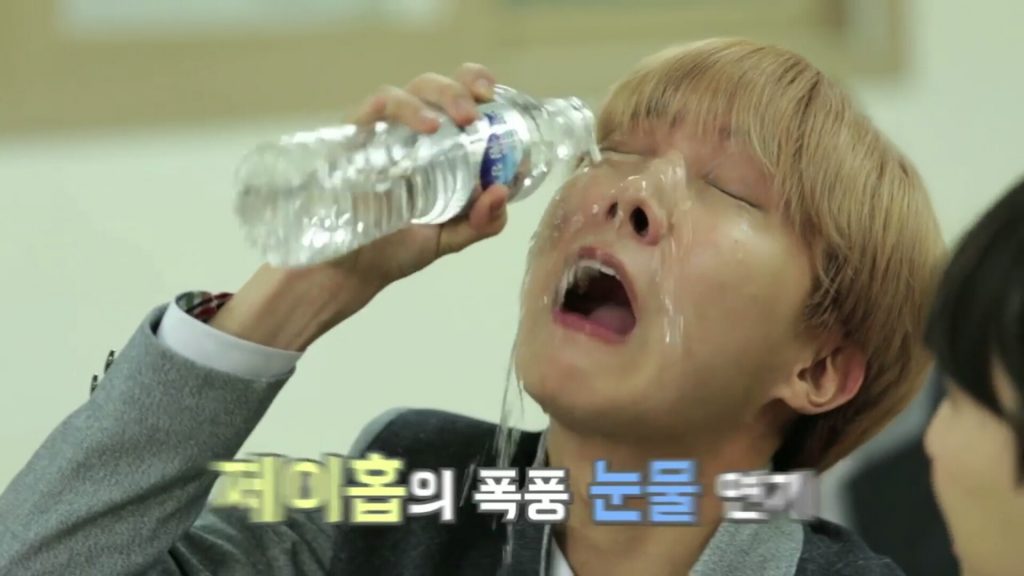 Class president Jimin’s showoff halted in few seconds. “Can I come and sit next to you?” said Jimin. However, he was cold-heartedly rejected by Suga’s “Just go straight past me.”

Idol Jin, on the one hand, showcased his moonwalk, unique vocalization technique, and his rings to Suga. However, no one among the six guys won the heart of Suga. This led to the male students going after another new student from the next class. 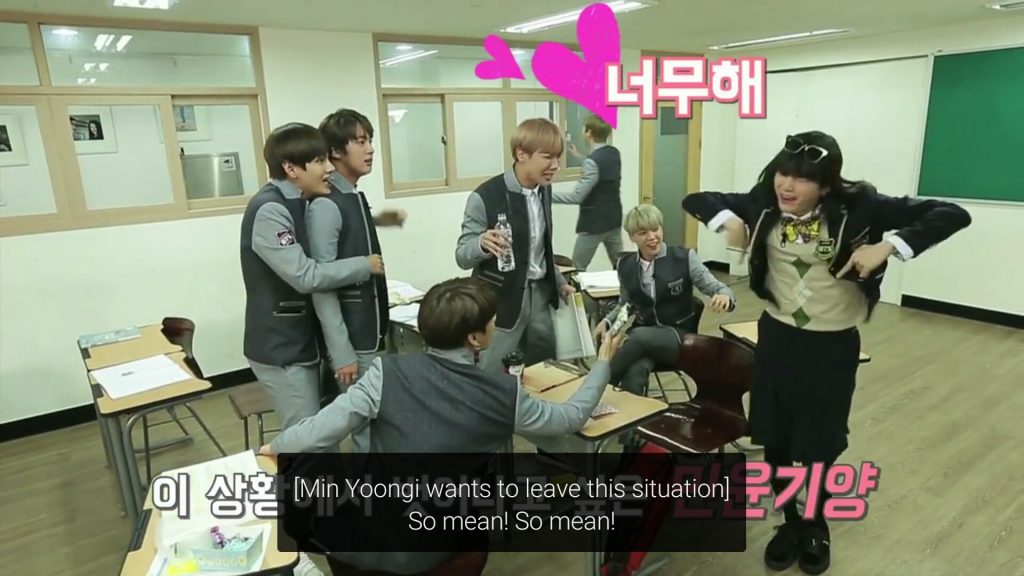 “It’s been awhile since ‘Run BTS’ came back and I think it was a skit that only left pain,” said Suga. The members praised Suga for his portrayal and transformation. “I look exactly like my youngest aunt,” said Suga.

We need your support! If you have enjoyed our work, consider to support us with a one-time or recurring donation from as low as US$5 to keep our site going! Donate securely below via Stripe, Paypal, Apple Pay or Google Wallet.
284
SHARES
FacebookTwitter
SubscribeGoogleWhatsappPinterestDiggRedditStumbleuponVkWeiboPocketTumblrMailMeneameOdnoklassniki
Related ItemsBTSj-hopeJiminjinjungkookrap monsterRun BTS! 2017sugaV
← Previous Story VIXX’s Hyuk Shares Thoughts On Self-Composed Track ‘I’ll Hug You’
Next Story → Zion.T Lightens Hearts With His New Release – ‘The Song’