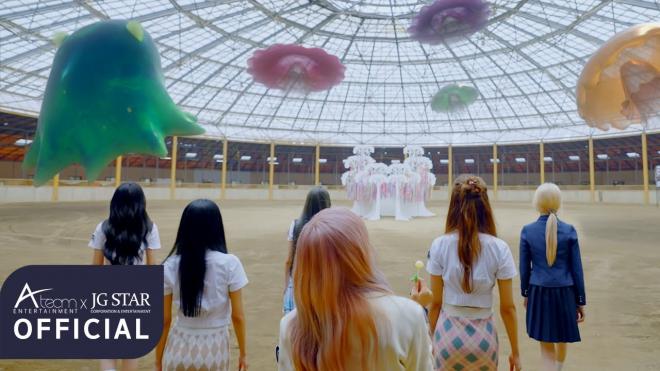 bugAboo excite fans as their music video teaser promises a new power group on the horizon ahead of their debut!

The upcoming girl group, bugAboo, continue to raise anticipation for their debut. The team released their second music video teaser, impressing viewers with their charisma. With the video, indications point to another super rookie group to emerge in the industry.

On October 18, bugAboo released their second music video teaser for their self-titled track on YouTube.

The clip revealed the members entering a new, fantastical atmosphere which summoned curiosities regarding their conceptual worldview. Amidst the more mystical aspects of their music video teaser, the scenes also revealed a spooky and tense atmosphere, which showcased the group’s plans to depict many dynamic sides of themselves.

Combined with close shots of the members, the video also showed contrasting scenes of a sports car and race horse, alluding to the powerful scale and momentum of their upcoming project.

A Debut You Won’t Want To Miss

During the teaser’s short span, the clip established bugAboo’s darker narrative, a unique change of pace from the brighter teen concepts dominating most new girl group releases. As a result, global K-Pop fans are eagerly waiting to explore the group’s intriguing storyline further upon their debut.

Ahead of their first release, bugAboo formed an impressive following through pre-debut projects. This includes a girl group cover medley and videos on TikTok, which have exceeded 22 million views on the platform. Their early success indicates their budding popularity, which many anticipate will only soar after their debut.

The group’s name, bugAboo, originates from “peek-a-boo” and “wow”, promising that they will overcome the fear of surprises while surprising the world itself with their talents.

Meanwhile, the group will host their debut showcase on October 22. Their debut self-titled single album releases across global music platforms on October 25 at 6 PM KST.