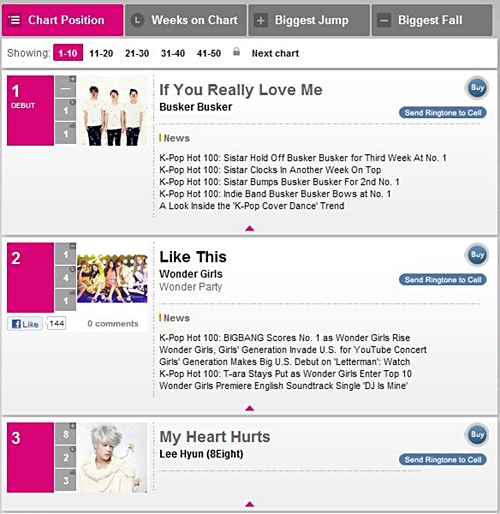 Busker Busker has claimed the top spot of Billboard‘s K-pop Hot 100 chart with If You Really Love Me and left the previous week’s winning track  Like This from the  Wonder Girls at the number two spot.

Billboard updated the chart on the 29th of June to reveal that not one, but four tracks from Busker Busker’s First Album Conclusion ranked within the top ten for the week of the 7th of July. It’s Hard to Face You currently ranks at fourth place, Showers is at sixth, and Neon Sign currently occupies the ninth place.

Other occupants of the top ten include Lee Hyun‘s My Heart Hurts at the third spot, f(x)‘s Electric Shock at the fifth, BIG BANG‘s MONSTER at the seventh, Verbal Jint‘s Pretty Enough at number eight and After School‘s Flashback at number ten.

Congratulations to Busker Busker on their success on the K-pop Hot 100!