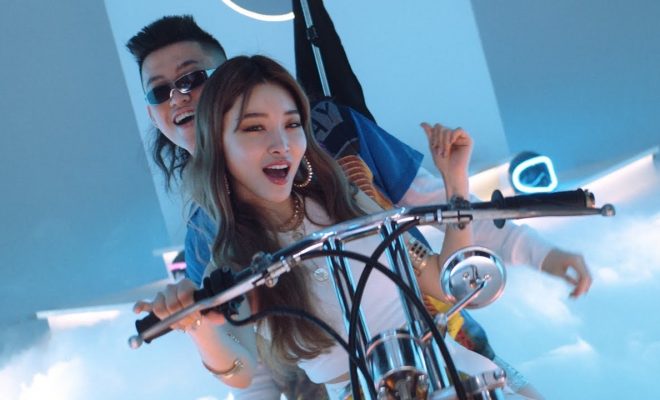 Chung Ha and Rich Brian definitely put the music scene into maximum overdrive as they delivered a new hit together!

Chung Ha and Rich Brian had sped up the old-school vibes with their latest collaboration track titled “These Nights”! Bringing on a nostalgic sound reminiscent of hit alternative R&B tracks well-loved from the past decades, the two Asian artists delivered a very memorable musical team-up through “These Nights”, a new timeless bop that fans will surely love!

Showing one of the top female soloists in the current K-Pop scene driving a motorcycle, pulling some dance moves, and looking fierce as ever, “These Nights” definitely roared with intensity both through its very aesthetically-pleasing music video and equally-astounding sound.

Rich Brian took over the song’s first part with his smooth singing, while Chung Ha totally owned the entire second verse of “These Nights” with her soulful vocals. We totally loved the Korean soloist’s line “Said, Who’s gonna do it like me?/ Said, Who’s gonna love you like me?” and how she sang it in such a hypnotizing way.

Its chorus, especially the lines “I can be your baby tonight/ You can be my lady tonight/ These nights, these nights, yeah”, was also very catchy in its own smooth way – which left fans having a hard time forgetting about it after hearing the song.

Marking her first collaboration with a non-Korean artist, “These Nights” also saw Chung Ha’s participation in writing the lyrics. The song also marks Rich Brian’s first-ever collaboration with a Korean musician, and the song belongs to the lineup of singles for his label 88rising’s crew album Head in the Clouds II, which will be available worldwide later on October 11.

Watch the music video for Chung Ha and Rich Brian’s latest collaboration “These Nights” below:

READ: Chung Ha And Rich Brian To Light Up “These Nights” In Latest Collaboration

Hellokpop, as an independent Korean entertainment news website (without influence from any agency or corporation), we need your support! If you have enjoyed our work, consider to support us with a one-time or recurring donation from as low as US$5 to keep our site going! Donate securely below via Stripe, Paypal, Apple Pay or Google Wallet.
FacebookTwitter
SubscribeGoogleWhatsappPinterestDiggRedditStumbleuponVkWeiboPocketTumblrMailMeneameOdnoklassniki
Related ItemsChung HaRich BrianThese Nights
← Previous Story All The Sides Of MONSTA X’s Joohoney That Make Him The Best Boy Ever
Next Story → VAV Intoxicates Fans With Announcement Of October Comeback With “Poison”