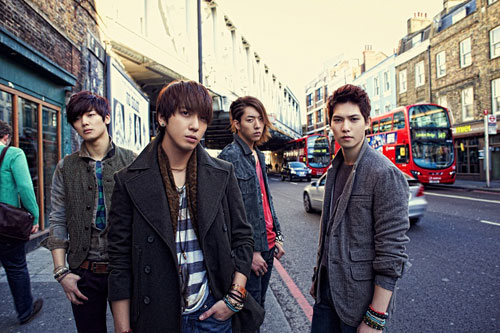 In the photo, CNBLUE members have a vintage style in London putting forth each of their chic but sad expressions. Prior to this, they released teaser videos of each member’s reaction according to the words of a lady, and left an impression and curiosity regarding the new album.

Their agency FNC Entertainment said, “We tried to look for a place that showed London’s exotic feeling. It rained often so our photoshoot was postponed many times but the members never stopped to be passionate about the photoshoot.”

On January 14th, CNBLUE will reveal their 4th mini album Re:blue, which has the meaning of ‘CNBLUE starting new’. The members promise that they will not forget their original intention of the band as they are set to release the new album on the 3rd anniversary since their debut.

On January 10th and 11th, the first and second BLUE teasers will be revealed in order and the mini album will be released on January 14th.