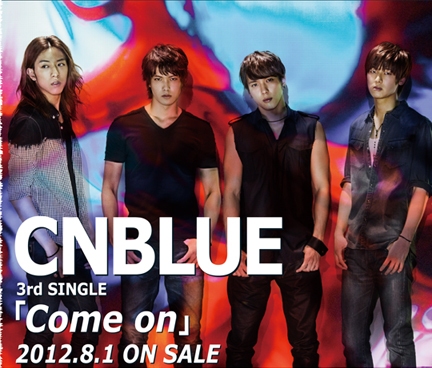 By The Editor | July 4, 2012
FacebookTwitter
SubscribeGoogleWhatsappPinterestDiggRedditStumbleuponVkWeiboPocketTumblrMailMeneameOdnoklassniki

Rock band CN BLUE has revealed the track list andMV teaser for their upcoming third Japanese single Come On! The new album will be available in three different editions which include the Limited edition, Regular edition and Lawson edition. Each version will also include the four tracks: Come On, Wake Up, Miracle, and the instrumental for Come On. It is reported that all the songs and lyrics on album are composed by two of CN BLUE’s members: Yonghwa and Jonghyun.

Come On is scheduled for release on the first of August. Check out the teaser below:

Hellokpop, as an independent Korean entertainment news website (without influence from any agency or corporation), we need your support! If you have enjoyed our work, consider to support us with a one-time or recurring donation from as low as US$5 to keep our site going! Donate securely below via Stripe, Paypal, Apple Pay or Google Wallet.
FacebookTwitter
SubscribeGoogleWhatsappPinterestDiggRedditStumbleuponVkWeiboPocketTumblrMailMeneameOdnoklassniki
Related Items3rd Japanese SingleCNBLUECome OnJonghyunMiracleWake UpYonghwa
← Previous Story Hangeng releases MV for Clown Mask
Next Story → After School releases dance practice video for Flashback