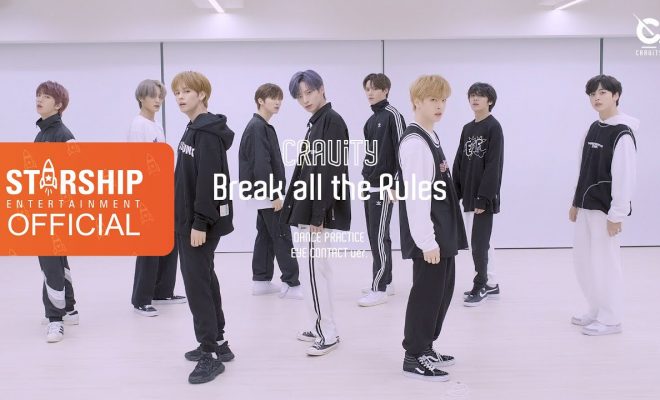 By Lyris | May 7, 2020
FacebookTwitter
SubscribeGoogleWhatsappPinterestDiggRedditStumbleuponVkWeiboPocketTumblrMailMeneameOdnoklassniki

CRAVITY demonstrates sharp and superb dance moves as they pump up with two of their tracks!

CRAVITY surprised fans with the release of the choreography video of their song “JUMPER”. Soon after, they release “Break All The Rules” dance practice on May 5.

CRAVITY surprises fans with the release of the detailed choreography of “JUMPER” fixed version.  Blowing up the stage with keen dance steps, CRAVITY grooves with the skipping sounds brought by their song “JUMPER”. The members take the dance studio with their fidgety yet synchronized motion.

“JUMPER” is a self-composed song gift given by MONSTA X’s Joohoney to his juniors. The track emphasizes the rookie spirit of the members bound for the journey while jumping and running around the world.

Break All The Rules

Likewise, CRAVITY dashes off into a heart-fluttering eye contact version of “Break All The Rules” dance video. The previous full shot choreography video solely focuses on the overall performance of “JUMPER”. However this time, the members make fans’ hearts flutter as they make an eye contact while dancing full of smiles.

“Break all the Rules” follows the theme of breaking free from the restrictions of the world.

Previously, the group released their debut album HIDEOUT: REMEMBER WHO WE ARE on April 14.

The title track “Break All The Rules” dominated various stages in music shows with spectacular performances. The group also acquired top spot in multiple music charts with a record of 53,000 albums from the first week of debut.