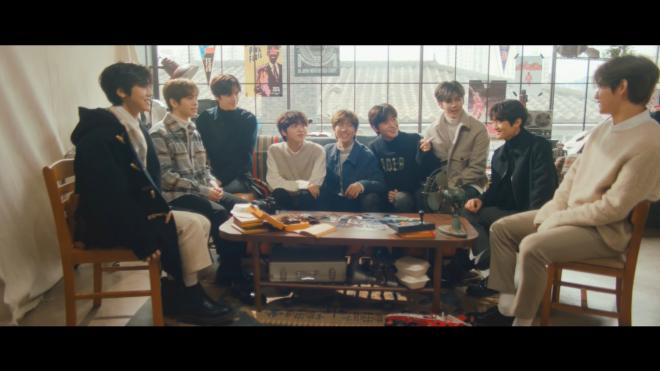 CRAVITY Builds Intrigue In New Prologue Teaser For “Season 3 Hideout: Be Our Voice”

CRAVITY members can be easily mistaken as actors — their acting skills in the prologue film are terrific!

CRAVITY has unveiled an interesting prologue teaser as a sneak peek to their upcoming album, CRAVITY Season 3 Hideout: Be Our Voice.

The prologue film begins with the names of Woobin, Seongmin, and Minhee being called by someone. Soon after stating the phrase “When you call my name I feel my presence”, the story of their friendship finally starts.

While listening to a song, Woobin sees a tiny beautiful butterfly sitting on the corner of his desk. Soon as it flies out of the window, he heads outside and faces in front of the elevator. However, when it opens, he hurriedly runs towards the emergency exit without even getting on, and shows signs of anxiety.

On the next scene, Minhee is busy arranging his things at home when the alarm clock suddenly rings at 3:00 p.m. He leaves the house, and outside, he sees Seongmin sitting alone on a bench. As soon as he takes off somewhere, Minhee sits to the place where Seongmin was sitting earlier.

Meanwhile, after walking aimlessly, Seongmin visits an arcade and plays darts. His eyes suddenly change when he is boo-ed for his inability to match the dart board. Later on, people become surprised, as he is able to precisely aim at the center of the dart board one after another.

After that, all he left is a scar on his hands and fingers. At that moment, Minhee appears and hands over Seongmin’s cell phone which he left at the bench. Looking totally surprised, Seongmin sees that Minhee and him have the same bracelet. Woobin calls them both and shows the same bracelet he is wearing.

Woobin sees Seongmin’s injured hand and he heals it with his own hands. Later, the three people join the gathering of Serim, Allen, Jungmo, Wonjin, Hyeongjun, and Taeyoung. Thereafter, CRAVITY is formed, and a special relationship is created.

CRAVITY is set to release CRAVITY Season 3 Hideout: Be Our Voice on 19 January 2021.

Watch the prologue film and tell us your theories below: