CRAVITY brings fans a hefty dose of laughter as they played various games in the latest episode of CRAVITY Park!

Exclusively available on CRAVITY’s V LIVE Channel, the variety series showcases the entertaining and playful side of each members. From thigh fights, relay basketball and mukbang, CRAVITY’s self-produced entertainment content is a sure treat for fans.

Starting with the Mukbang Special, the members who could win the game will be the only one to eat the food filled with their favorite menus.

The first game “thigh fight” will determine who among the members have the strongest thighs. In the initial rounds, Woobin, Serim and Minhee quickly grabbed the victory while Allen and Seongmin started the game with tense through an unexpected fierce battle. In the final round, Serim broke the start of mukbang with a victory over Hyeongjun, a self-proclaimed thigh king.

With the next game “dance quiz”, the members actively danced to hit songs and showed its point choreography. Sending full and dynamic energy on stage, CRAVITY turned the segment into a relay mukbang.

Allen, the dance textbook, Hyeongjun, who perfectly digests songs from various generations, and Wonjin, the owner of powerful performances, dominated the stage and claimed victory. During the game, the members switched the dance quiz segment into an eating show which drew piles of laughter from fans.

Unlike the fierce individual competition, CRAVITY showcases brilliant teamwork in the final game of the relay basketball. Based on the rules, the members should make a relay basketball shot within 25 seconds. 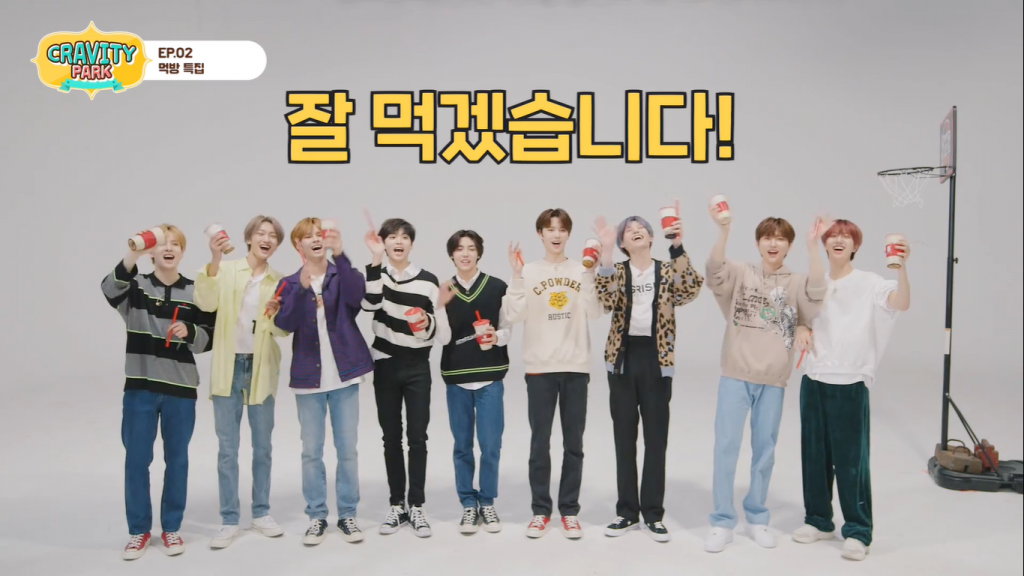 As they continued practicing step by step under the guidance of the basketball genius Wonjin, CRAVITY managed to make it in the third round. For their hard-earned success, each members received bubble tea as a gift, giving them genuine smiles until the end of the episode.

The boy group has drawn great attention from fans through their cute chemistry and self-produced content that features bright and lively charms of the members. They will continue the challenge as entertainment stars by presenting CRAVITY Park full of rich and fun contents under wide range of themes.

Meanwhile, CRAVITY is gearing up for the release of the music video for their b-side track “Cloud 9” on June 17. In addition, the group has been consequently releasing refreshing individual concept photos in various social media platforms.

CRAVITY Park is released every Monday at 9 PM KST on the group’s channel on Naver V LIVE.