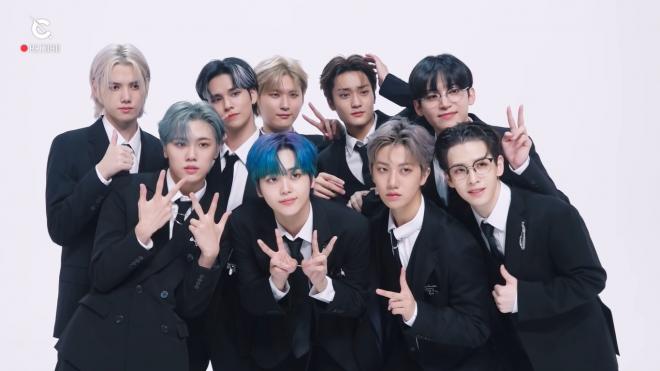 Filled with fun and laughter, CRAVITY just gave fans a look at how they filmed the suit dance for “Gas Pedal!”

CRAVITY has unveiled the behind-the-scenes and official making of “Gas Pedal” suit dance through their social media accounts.

Released through their very own reality show called C-Record, the boys of CRAVITY took Luvitys into the filming of the suit dance version of “Gas Pedal.”

Garbed in fine suits, Serim, Allen, Jungmo, Woobin, Wonjin, Minhee, Hyeongjun, Taeyoung, and Seongmin display their impeccable sense of style. Backed up with striking visuals and compelling performance, CRAVITY showcased an audacious feat of coolness as they shoot for the suit dance.

Highlighting their sophisticated image and chic aura, CRAVITY displayed a different mood far from the usual. Aside from performing a sleek group dance, they exhibited their professionalism by meticulously monitoring their dance to make a more perfect video.

During break time, they even took pictures of each other and played various games all while showing their fun sides.

Released on August 19, CRAVITY returned with its first full-length album THE AWAKENING: Written in the Stars, which was headlined by the title track “Gas Pedal.”

Setting an impressive record under their name, CRAVITY sold 109,123 album units in its first week of release. They also showcased an unstoppable growth as the album entered the Top 10 of iTunes Album Charts in several countries including, Thailand, Indonesia, Malaysia, Singapore, and Vietnam.

Moreover, the music video for the title track “Gas Pedal” has surpassed 10 million views within a week of its release.

Though the promotions for THE AWAKENING: Written in the Stars has already ended, CRAVITY continues releasing various contents and communicating with Luvitys via their social media accounts.

Meanwhile, CRAVITY will continue to meet fans on different events and platforms in the future.

Watch the original suit dance for “Gas Pedal” below!