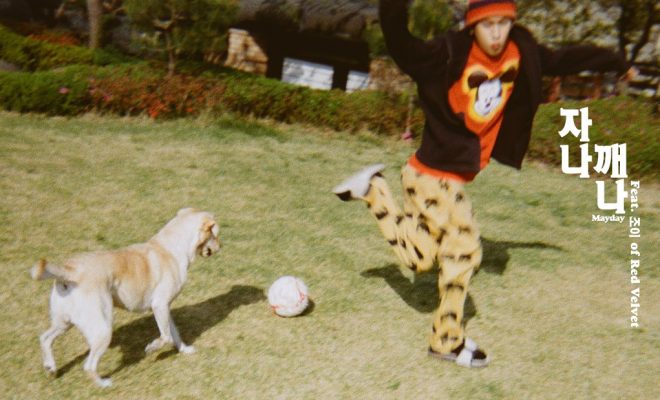 By Kirsten | May 18, 2020
FacebookTwitter
SubscribeGoogleWhatsappPinterestDiggRedditStumbleuponVkWeiboPocketTumblrMailMeneameOdnoklassniki

Solo artist, Crush, unveiled a peculiar music video teaser for his newest single titled “Mayday” via his YouTube channel on May 17th. This track will be the first song to drop from his project called “homemade 1” which is a series of singles lined up for release.

“Mayday” is highly anticipated as it is Crush’s first release since his last album, From Midnight to Sunrise, released in December 2019. Additionally, the song is a special collaboration with Red Velvet’s Joy.

The trailer begins with a light-hearted approach. Holding a camera, the artist films himself giving his viewers a house tour in an “online housewarming”. Firstly, the artist proudly shows his turn-table and piano to his viewers. Wanting to introduce his pets to his audience as well, Crush leaves his camera in the living room as he sets out in search of them.

The video takes an eerie turn as the living room collapses into darkness. The camera switches to night vision mode, and a blanket laying on the sofa begins to move.

A figure underneath the blanket stands up. As the camera flickers, the person’s face abruptly appears on the screen. With nothing but two holes cut out in the blanket, audiences only see the haunting sight of two eyes peering at them.

The artist also teased the song through his official Instagram account. In the short clip, Crush tastes his own tears as a flute-driven melody plays in the background.

Abruptly switching from casual to creepy, the newest music video teaser has many fans curious about what the song’s concept will be. Furthermore, many are excited to hear Crush and Joy’s harmonious vocal collaboration in the track.

“Mayday” releases on May 20th at 6:00pm KST, across various music streaming sites.