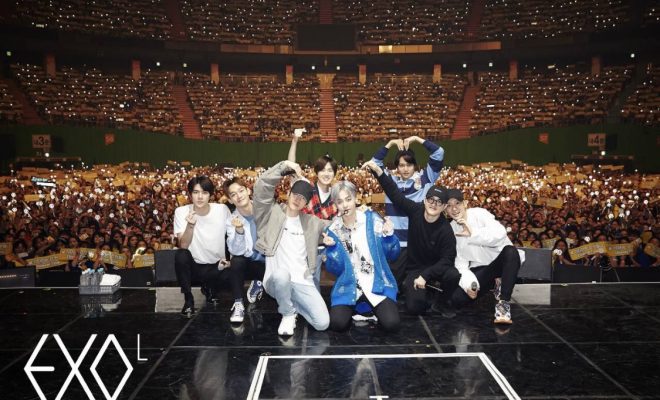 Get your tissue box ready, EXO-L, because we have some emotional stories to share about EXO!

As everyone knows, Xiumin will enter boot camp on May 7, becoming the first EXO member to start his mandatory service. Which also means he will take a two-year hiatus in the process.

Before he officially bids a temporary goodbye, the singer decided to give fans a special farewell party through his solo fan meeting Xiuweet Time held on May 4. Just like how EXO-L intend to send him off with the sweetest memories, his dongsaengs also did not let the opportunity to slip as they came together on stage to surprise their eldest hyung.

ALL OF EXO MEMBERS SURPRISING MINSEOK ON HIS FANMEETING BEFORE GOING TO THE MILITARY AND CALLED YIXING ALL THE WAY FROM CHINA FUCK YALL THEY ARE SO PRECIOUS I AM GOING TO CRY????????pic.twitter.com/fy9UWzW5by

Suho, Chen, Baekhyun, Chanyeol, D.O, Kai, and Sehun joined Xiumin on stage to greet EXO-L together for the last time in a while. The members relayed their well-wishes for their hyung as he sets himself up to join the army and fulfill the duty expected of all abled-bodied men of South Korea.

They commended Xiumin for his performances during the fan meeting. They also hoped for him to be healthy and safe, come back quickly without getting hurt, and show a better image to fans when he returns.

Xiumin is the sweetest! Please return healthily and happily ^^ best friend forever, bff, Kim Junmyeon will always there for you ?

Baekhyun: Minseok ah~ go and come back safely~ Bye minseok~ ??? and then he got beaten by minseok.. this boy really ㅋㅋㅋ

But really tho, it’s so touching to see EXO members gathering together, saying “We are One, Let’s love” once more TTTTT

Kai, who went straight to the event following his arrival from the United Kingdom, was particularly emotional during his ment. He praised Xiumin for being cool and working hard through the years. “Don’t get hurt and come back safely. I love you,” he said, tearing up.

Overwhelmed with emotions, Xiumin broke down as he hugged Kai.

In addition, although he was not physically present to join his members, Lay, through a phone call, greeted fans and relayed his message to his hyung and other EXO members, as well.

Meanwhile, during the phone call, Lay said he was always grateful for Xiumin. He then apologized for not being with him often and went on to remind him to take care of himself and return safely. He also expressed his longing for his members, saying “I missed EXO members a lot.”

YX: Minseok hyung, I'm always thankful for you. I'm sorry that I couldn't be with you a lot. I love you. Take care of yourself and return from the military safely. I miss EXO members a lot.

Xiumin, for his part, sweetly told Lay to come back quickly to which he responded with a cute “Yes, hyung!”.

Members that came to surprise Minseok also called Yixing during fanmeeting. Despite not standing next to each other, our OT9 became finally complete. Their brotherhood is stronger than anything. #XiuweetTime #EXO #엑소 @weareoneEXO pic.twitter.com/Hehm65IarC

Additionally, Lay, together with Baekhyun, also left a video message for Xiumin, shown earlier in the program.

BH: Minseok is my hyung, but 60% of the time he feels like my dongsaeng. He likes cute and small things.
YX: To me, Xiumin is a good hyung. He organizes everything that I can't. He's very very detailed.pic.twitter.com/vewp1cVfmm

Suho echoed his hyung’s sentiments and addressed fans, saying “Whether it’s five, 10, or 20 years, EXO will always sing, dance, and perform for you. Thank you and we love you, EXO-L!”

JM: EXO-L who are live streaming, do pass our words to them, alright? As long as EXO-L continues to support, cheer & love EXO, we will continue to stand on this stage to sing & dance for 5, 10, 20 years

Following the sweet and heartwarming fan meeting, Xiumin will treat fans to his solo song “You” on May 9.