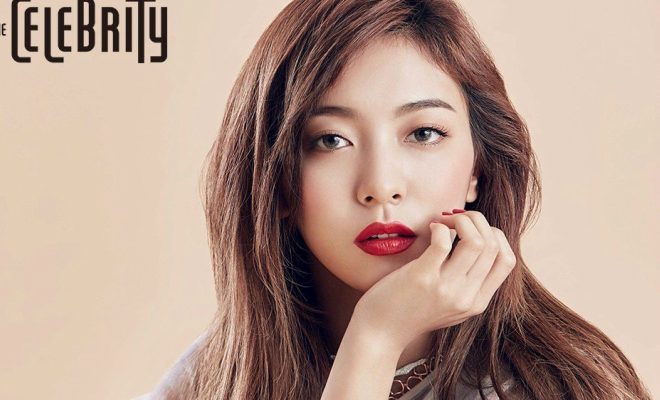 Are you ready to see soloist Luna back in action again?

South Korean singer and f(x) member Luna reveals plan for her next solo release this month.

The vocalist of f(x) is reportedly at the final stage of preparation for an upcoming music expected to be launched this April.

Despite being active as a singer through her collaborations, drama OST appearances, and songs for SM Station, it has been two years since Luna released her first extended play Free Somebody.

The album, which marked her solo debut, contains six tracks including “I Wish” and “My Medicine” which the f(x) member helped write and compose.

Free Somebody peaked on Gaon’s Album Chart at the number 5 spot and Billboard’s World Albums at number 3 spot.

Luna’s most recent work include a collaboration with HIGHLIGHT’s Yong Jun Hyung in “Tell Me It’s Okay” and with EXID’s Hani and MAMAMOO’s Solar in “Honey Bee”. She also sang for the dramas Good Thief, Bad Thief and The King Loves.

No exact date or further details were released as of press time regarding the solo return of Luna.

Still, expectations are high since the singer is recognized for her vocal abilities. Her debut EP also showcased the f(x) member versatility as a singer as she departed from her balladeer image by going for an EDM genre for her solo debut.

Hellokpop, as an independent Korean entertainment news website (without influence from any agency or corporation), we need your support! If you have enjoyed our work, consider to support us with a one-time or recurring donation from as low as US$5 to keep our site going! Donate securely below via Stripe, Paypal, Apple Pay or Google Wallet.
FacebookTwitter
SubscribeGoogleWhatsappPinterestDiggRedditStumbleuponVkWeiboPocketTumblrMailMeneameOdnoklassniki
Related Itemsf(x)Luna
← Previous Story UNB Receives Explosive Response In Third Busking Stage For “Boyhood”
Next Story → MAMAMOO’s Moonbyul To Go Solo For Next Release Featuring Red Velvet’s Seulgi