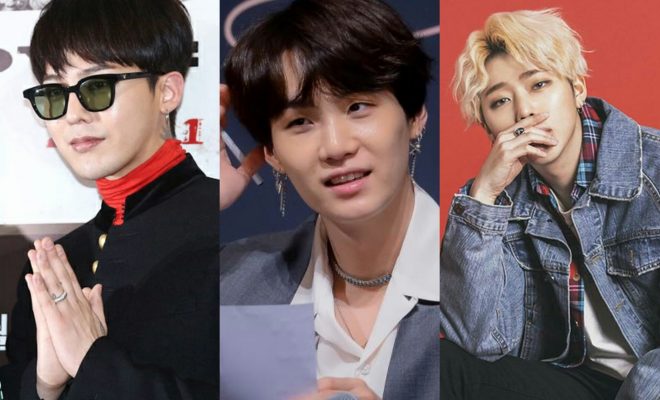 Talking about being multi-talented? These idols can do it all!

Music platform 10JAM, operated by Genie Music Company, asked K-Pop fans recently which idols are the best in being an all-around gem in the industry.

These idols, who are capable of dancing, singing, writing lyrics, and composing music, were voted on via an online poll. It ran for two weeks in November, asking the question to a demographic mostly comprised of teenagers.

G-Dragon from BIGBANG landed on the list’s number one spot with 21 percent of the total votes. The rapper has been selected by many voters and recognized for his plethora of talents despite currently being away from the public eye as he serves his mandatory military duty.

Placing second on the list is BTS’ Suga, who garnered 17 percent of the total votes. He is actively working as a multi-functional performer by showing his skills as a rapper, dancer, and even vocalist.

In addition to that, he has also been participating directly in the lyric writing, composition, and production process of songs in BTS’ albums.

Block B’s Zico claimed the third place with percent, proving his strength as a singer, songwriter, rapper, record producer, and former leader and member of Block B.

B1A4’s Jinyoung ranked fourth with 9 percent of the votes, while BTS’ RM falls just a percent short behind with 8 percent on the fifth spot, making him the second BTS member on the list.

10JAM enables voting on various topics including best or favourite songs, brands, and even artists in order to get and explore the public’s insights.

Hellokpop, as an independent Korean entertainment news website (without influence from any agency or corporation), we need your support! If you have enjoyed our work, consider to support us with a one-time or recurring donation from as low as US$5 to keep our site going! Donate securely below via Stripe, Paypal, Apple Pay or Google Wallet.
FacebookTwitter
SubscribeGoogleWhatsappPinterestDiggRedditStumbleuponVkWeiboPocketTumblrMailMeneameOdnoklassniki
Related Items10jamBigbangBIGBANG's G-DragonBTSBTS SugaGenie MusicZico
← Previous Story BLACKPINK’s “Ddu-Du Ddu-Du” Is Most Watched K-Pop MV On YouTube In 2018
Next Story → Nam Joo Hyuk & Han Ji Min Show Synergy With Fellow Cast Members In First Table-Read Of New Drama