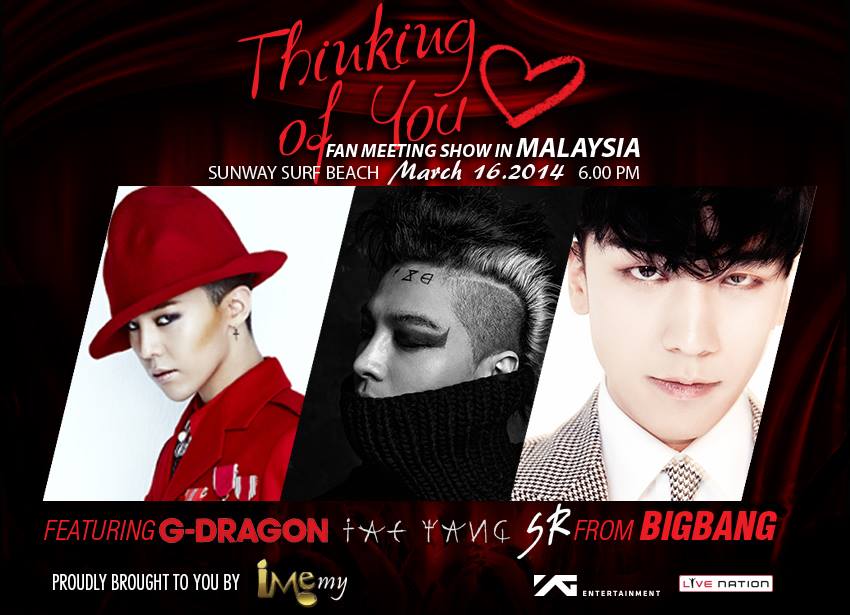 G-Dragon, Taeyang and Seungri to meet Malaysian fans this March

Kpop fans in Malaysia are in for another treat as BIGBANG‘s G-Dragon, Taeyang and Seungri are confirmed to come down to Malaysia for a fan meeting show titled ‘ Thinking Of You’ on the 16th of March!

The three Korean sensations are to set Malaysian VIPs’ hearts on fire with their first ever exclusive fan meeting in Malaysia on the 16th March at 6.00pm at the Sunway Surf Beach. This fan meeting show is brought to you by IME Productions, which has successfully brought INFINITE to the shore of Malaysia, and also will be bringing the sister group of BIGBANG, 2NE1, to Malaysia as a part of their All Or Nothing 2014 World Tour on the 23rd of May.

Fans should expect exhilarating performances by the trio and should seize the opportunity to get up-close and personal with BIGBANG members. They will also be holding two other fan meets on the 15th of February in Hong Kong and on the 15th of March in Singapore.

Hellokpop, as an independent Korean entertainment news website (without influence from any agency or corporation), we need your support! If you have enjoyed our work, consider to support us with a one-time or recurring donation from as low as US$5 to keep our site going! Donate securely below via Stripe, Paypal, Apple Pay or Google Wallet.
FacebookTwitter
SubscribeGoogleWhatsappPinterestDiggRedditStumbleuponVkWeiboPocketTumblrMailMeneameOdnoklassniki
Related ItemsFan meetingGdragonIME ProductionsmalaysiaSeungriSunway Surf BeachTaeyang
← Previous Story Topp Dogg mixes the traditional with modern elements in MV teaser for ‘Arario’
Next Story → 2NE1’s 2014 World Tour ‘All Or Nothing’ comes to Malaysia in May