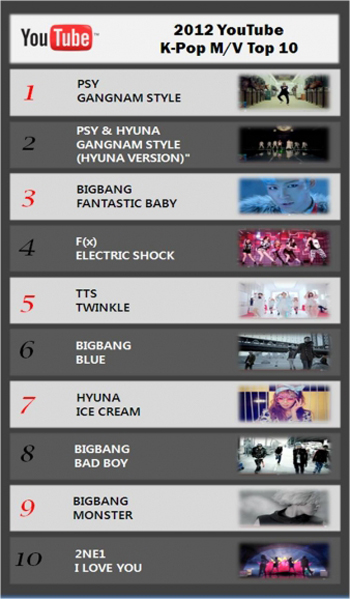 Psy’s Gangnam Style is the most seen k-pop video worldwide on YouTube followed by Hyuna‘s Oppa just my style. On December 10, YouTube revealed the Top 10 most seen videos since January 1 to December 4. Gangnam Style was #1 as expected.

Previously on July 15, when Psy’s 6th album was released,  the tittle song Gangnam Style set a worldwide record for the most viewed video. On the morning of December 10, the video registered 922 millions views. YouTube stated:

“This music video was seen by almost 7 million people every day and this way this video started to spread out. This video was the most copied as parody, reaction or flashmob with derived content.”

In addition, Hyuna of 4minute that featured in the music video Gangnam Style has her own version at number 2. On December 10, this music video had 185 millions views.

Hellokpop, as an independent Korean entertainment news website (without influence from any agency or corporation), we need your support! If you have enjoyed our work, consider to support us with a one-time or recurring donation from as low as US$5 to keep our site going! Donate securely below via Stripe, Paypal, Apple Pay or Google Wallet.
FacebookTwitter
SubscribeGoogleWhatsappPinterestDiggRedditStumbleuponVkWeiboPocketTumblrMailMeneameOdnoklassniki
Related Items2NE14MinuteBIG BANGf(x)Gangnam Stylegirls generationHyunaPsyTaeTiSeotop10TTSYoutube
← Previous Story KARA’s Han Seungyeon and Park Gyuri confirmed dates of solo performances
Next Story → Son Dambi to date female fans