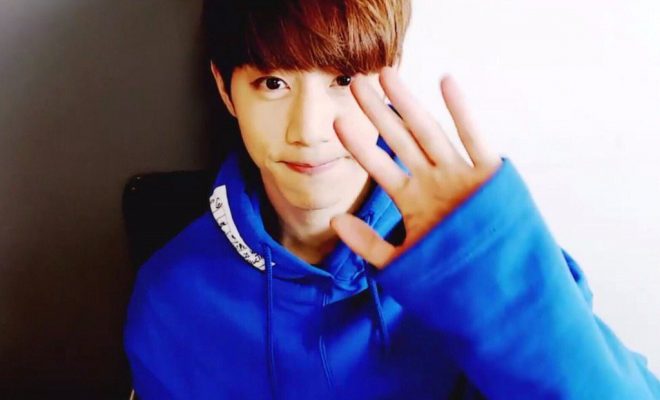 GOT7’s Mark is off to the jungle!

GOT7‘s oldest member Mark bade IGOT7s his ‘last farewell’ through a V Live broadcast on March 30 before heading off to the jungle for a week.

The idol will join the upcoming season of SBS’s ‘Law of the Jungle’ in New Zealand alongside After School‘s UEE, Super Junior‘s Shindong, actor Sung Hoon, among others.

Before immersing himself to a life in the jungle, the GOT7 member shared his thoughts on taking part in the show. “I am a bit worried because I have to sleep in the jungle,” he said. Aside from sleeping in the unknown territory, he admitted that he hates mosquitoes. According to Mark, he will wear long-sleeved shirts and leggings, and cover his face, hands, and feet with mesh to protect himself against mosquitoes.

The idol also reassured his fans that he will come back safely and would not get hurt. “Don’t worry about me. I guess you’re worried if I get injured. I’ll be careful,” he said. He then asked fans to eat well and stay healthy while he is away. He promised to start a solo V Live broadcast upon his return.

However, Mark also vowed that he will “never ever” take his clothes off in the jungle — but promised to catch a fish for his fans. Aside from no-shirtless Mark, the idol warned IGOT7s that he may get a bit tanned, although he promised to apply sunscreen. “Even though I get tanned, I hoped you won’t hate it,” he said.

Due to his participation in the show, the GOT7 member will miss out on the group’s promotion for a week. The group will be performing as six members on shows. “One is back and the other is out,” commented Mark during the broadcast. He then assured fans that the entire group will be seen on stage once again after a week.

Mark’s father, Raymond Tuan, has shared his sentiments on his son’s jungle venture. In a Twitter post, he said he believed that his son will adapt and perform well.

Q: Papa how do you feel about Mark going to the jungle?
A: I believe he'll be very adaptable and good performance?! pic.twitter.com/w22eFilmdN

Mark, together with Sung Hoon, Shindong, UEE, Kim Byung Man. Kang Nam, and Park Chul Min has departed from Incheon airport last March 31. The season is set to air in May.

451
SHARES
FacebookTwitter
SubscribeGoogleWhatsappPinterestDiggRedditStumbleuponVkWeiboPocketTumblrMailMeneameOdnoklassniki
Related ItemsAfter SchoolGOT7Kang NamKim Byung ManLaws of The JungleMarkPark Chul MinShindongSung HoonSuper JuniorUEE
← Previous Story Girl’s Day To Boast Team Chemistry With Fifth Album: “There is no such thing as a seven-year curse for us”
Next Story → IU Releases Her ‘Ending Scene’ With Kim Soo Hyun