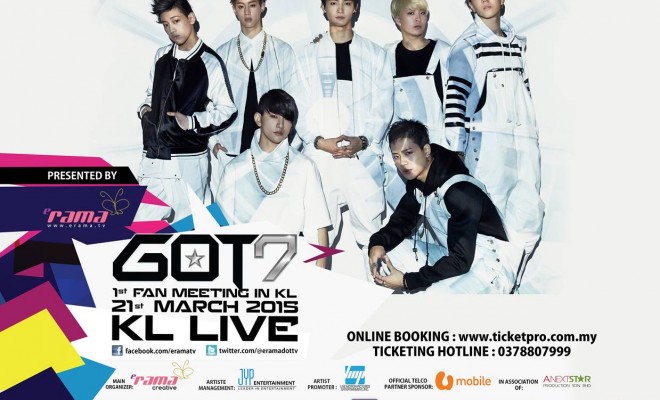 GOT7 To Meet Fans in Malaysia This March

The wait for Malaysia’s fans is finally over! Erama Creative, as the organizer and main presenter of the event, is proudly bringing the seven boys back: GOT7 will be having its very 1st fan meeting in Kuala Lumpur on the 21st of March at KL Live, Life Centre Kuala Lumpur.

The 7 multi-talented boys were spotted in Kuala Lumpur and Shah Alam in Malaysia months ago to shoot the music video for “A” which was then released on YouTube, collecting over 16 million views in just 8 months.

For GOT7’s very first Fan Meeting in KL, there was a pre-sale tickets event held at Quill City Mall on the 28th of February, was swamped by fans. Over 300 fans gathered at the mall, waiting for the ticket counters to open, wishing to grab the limited 100 of VIP+ tickets that came with High-5 session pass and the VIP tickets. The VIP+ tickets sold out within 30 minutes. The pre-sale tickets event ended within 4 hours.

The tickets continue selling fast via TicketPro event as the official ticketing agent. The ticketing zones TOP 1 & TOP 2 were sold out in 2 days, the only available left for grabs are VIP, ACE1 and ACE2.

The event’s official Telco Sponsor, U Mobile is riding upon the K-pop train as the tracks move along in high energy. Telco is thrilled to bring the award-winning, emerging K-Pop group GOT7 to Malaysia for its first fan meeting. They are very popular amongst teenagers and youths, which is the majority of U Mobile’s fans.

“We are proud to be the official telco sponsor of this event as it truly attests towards our commitment in developing young talent by encouraging them to achieve their aspirations. When we heard of what GOT7 has managed to achieve in less than 2 years since its debut, we were inspired. We hope that youths in Malaysia will be just as relentless in realizing their own dreams and ambitions of great success.”

She also added that U Mobile customers will stand a chance to win tickets to the meet-and-greet session. 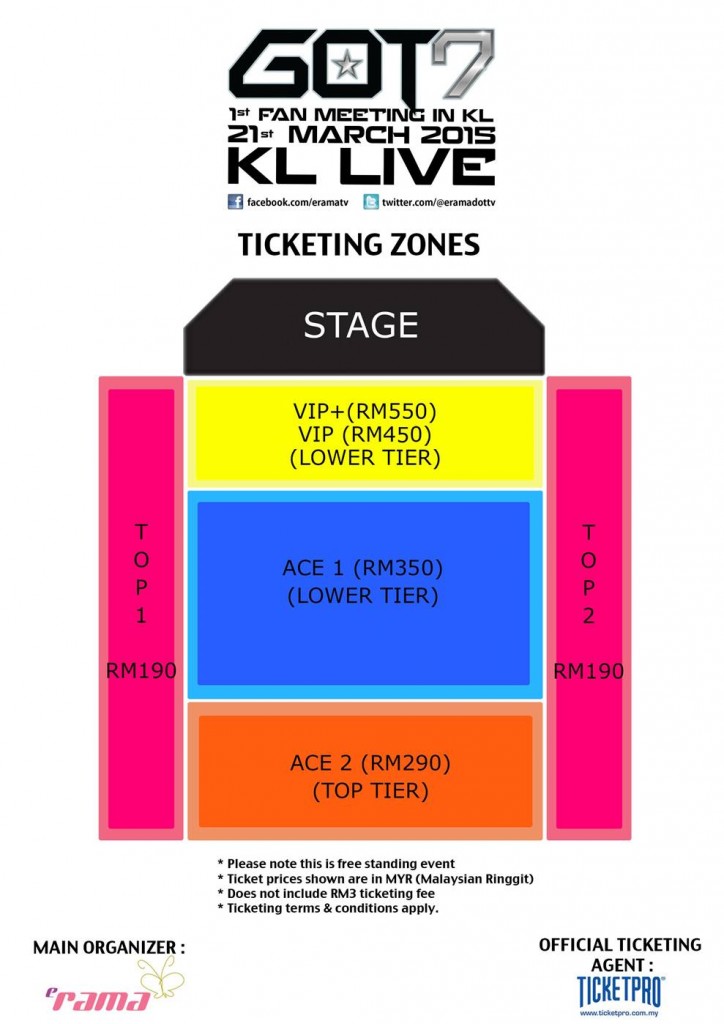 The event is approaching fast: only 11 days to GOT7’s first Fan Meeting in Kuala Lumpur! Limited tickets are still available on www.ticketpro.com.my and lucky ticket holders will have a chance to win a photo opportunity and an exclusive signed CD album. More information will be posted on Erama Creative’s official Facebook page: www.facebook.com/eramatv .