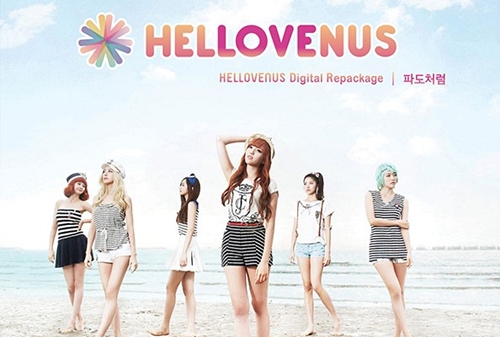 Stripes and sailors hats seem to be very popular among comeback concepts this summer. Hello Venus has not rested since their debut in May and have released a repackaged album, Like A Wave, on July 4.

The repackaged album contains a total of five tracks, four from Venus, their debut mini-album, and one new track. The cover of the album displays the members on a beach wearing navy blue and white striped apparel and sailor hats.

In regards to the album, Hello Venus stated, “We are going to sweep the music scene ‘Like a Wave.'”

Hello Venus will make their comeback on M! Countdown on July 5.

Hellokpop, as an independent Korean entertainment news website (without influence from any agency or corporation), we need your support! If you have enjoyed our work, consider to support us with a one-time or recurring donation from as low as US$5 to keep our site going! Donate securely below via Stripe, Paypal, Apple Pay or Google Wallet.
FacebookTwitter
SubscribeGoogleWhatsappPinterestDiggRedditStumbleuponVkWeiboPocketTumblrMailMeneameOdnoklassniki
Related ItemsHello VenusLike A WaveVenus
← Previous Story SISTAR reveal dance practice video for ‘Loving U’
Next Story → The Wonder Girls unveil first video teaser for ‘Like Money’