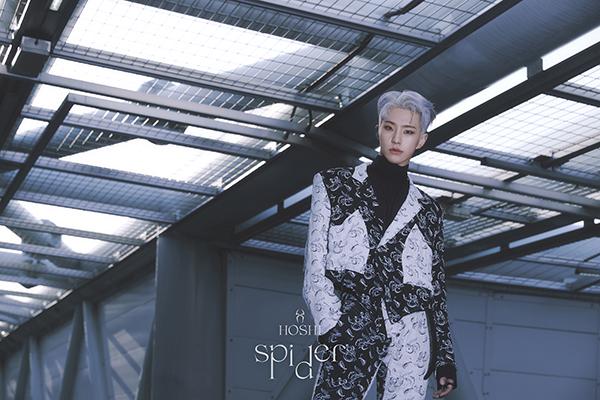 Hoshi marks his solo debut for his mixtape Spider with a captivating performance.

As a prelude to the performance, Hoshi was first seen in all white, matching his currently bright platinum hair color. Hoshi began his special stage by seemingly looking for something. The dancers then surrounded Hoshi, to reel him back into their clutches. Hoshi, however, managed to break free. The scene then cut to his actual performance of the song.

The idol showed off his prowess as a dancer with powerful and sensual choreography while he donned a sleek, all-black ensemble. Spider‘s choreography also offers a great opportunity for Hoshi to exhibit his athleticism.

Hoshi began the song by dangling upside down on a pull up bar, swaying gracefully and performing a series of tricks while still remaining on the bar. He then pulled himself up and off the bar where he then met with his fellow dancers on the ground.

In contrast to Hoshi’s outfit, the dancers that surrounded him were dressed in all white. The dancers also wore bedazzled masks that covered their faces for the performance. In theme with the mixtape, the stage was decorated with large cobwebs that stretched from corner to corner.

Hoshi’s solo mixtape Spider was released on April 2 and is free to download on Dropbox and Google Drive. It is also  available to stream on SoundCloud, Spotify, and Apple Music.

You can watch the music video for Hoshi’s first mixtape below: