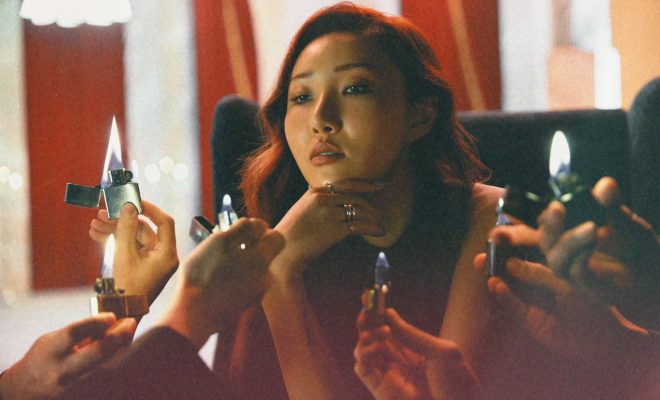 Hwasa leaves fans speechless as she unveils her breathtaking highlight medley for her upcoming album, María.

Hwasa gave a superb sneak peek of her thrilling tunes from her first album. The songstress released an aesthetic highlight medley on MAMAMOO’s official SNS.

Hwasa’s upcoming album entails of 7 songs, including the catchy bop track “Twit”. There are 6 other tracks on the album, namely, “Intro: Nobody else,” her eponymous title track, “Maria,” “WHY,” and “LMM”. She has collaborated with ace artists on two tracks on the album. Zico has produced a track for the singer titled, “Kidding”. Meanwhile, DPR Live will be featuring alongside Hwasa on the track “I’m bad too”.

The highlight melody opens with the very first track Hwasa unveiled: the introspective “Intro: Nobody else” that consists of a soft melody with altering tones in the bridge. The vocalist certainly doesn’t kid around as she asks “Are you kidding me?” in her soft, breathy voice in the playful R&B toned track “Kidding.”

It is ironic when the songstress asks, “Why don’t you love me?”, as she is sure to make listeners fall in love with her power-packed vocals on her track “WHY?”. Listeners are in for a treat as Hwasa and DPR Live sound absolutely phenomenal as they harmonize their vocals flawlessly  on the synth pop track, “I’m bad too”.

“LMM” is definitely going to be one soul-stirring number by the looks of it as Hwasa stuns with her awe-inspiring vocals and an especially heavenly high note on this snippet. Next, the singer shows off her vocal chops and melodic rap verses on her much loved track “Twit”. Last but certainly not the least, Hwasa gives a taste of her title track “Maria” which boasts of some real foot tapping beats.

With this, Hwasa has really raised the anticipation of fans who thankfully, wont have to wait too long to hear this intriguing album as the multi-talented artist is all set to release her first mini album María through various music sites at 6PM KST on June 29.

Hellokpop, as an independent Korean entertainment news website (without influence from any agency or corporation), we need your support! If you have enjoyed our work, consider to support us with a one-time or recurring donation from as low as US$5 to keep our site going! Donate securely below via Stripe, Paypal, Apple Pay or Google Wallet.
FacebookTwitter
SubscribeGoogleWhatsappPinterestDiggRedditStumbleuponVkWeiboPocketTumblrMailMeneameOdnoklassniki
Related ItemshwasaMAMAMOOMaría화사
← Previous Story SF9’s Taeyang, Hwiyoung, And Chani Captivates With Their Cool And Charismatic “9loryUS” Teaser Photos
Next Story → TWICE Surpasses 400 Million YouTube Views With “What Is Love?”