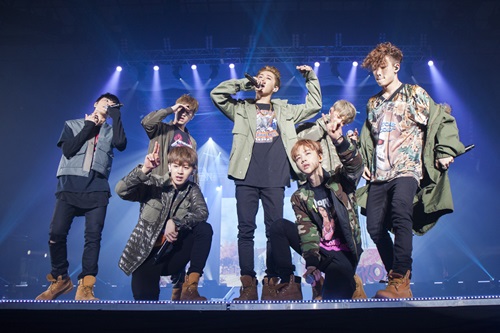 iKON Kicks Off Its Japan Tour

The boys kicked off their first concert at Fukuoka International Congress Center in Fukuoka, Japan on February 11, drawing 8,000 fans. At the first show, the group sang some hits from the album Welcome Back, namely Rhythm Ta, My Type, Airplane and Apology, fascinating the audiences with the members’ live skills and powerful renditions.

The boys could not hide their happiness and pleasure, saying: “We are so happy to hold a concert and be with people who love us. We wish you enjoy our first concert in Japan. It is a pleasure to perform in front of you.”

The tour will continue to make stops at Nihon Budokan in Tokyo on February 15 and 16, at Kobe World Kinen Hall in Kobe on February 20 and 21, at Makuhari Messe in Chiba on March 12 and 13, at Osaka Jo Hall in Osaka on March 15. It is expected to attract 146,000 fans in total from the five Japanese cities.

To express deep gratitude to local fans, the boy band is set to drop a new album titled WELCOME BACK – COMPLETE EDITION on March 30. This album will consist of the Japanese versions of 3 tracks Dumb & Dumber, What′s Wrong?, I miss you so bad and a rock version of Rhythm Ta. Especially, the remix version of Anthem will also be included in the album for the first time.

Meanwhile, iKON has just wrapped up its solo concert iKONCERT 2016 SHOWTIME TOUR at Olympic Gymnastics Arena in Bangi-dong, Seoul on January 30 and 31. The group is set to hold new concerts in Daegu on February 27, and in Busan on March 5 to meet fans living far from Seoul.