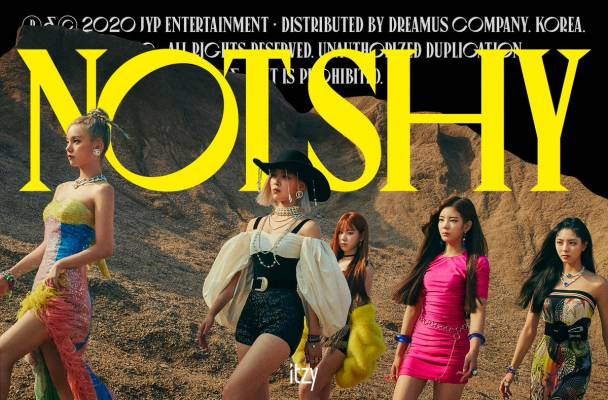 ITZY storms the scene with their newest concept image for their upcoming comeback with “Not Shy”!

ITZY releases their latest teaser for their title track, “Not Shy” across their SNS channels on July 3! The photo captivates fans with the group’s refreshing concept change.

The picture features the group walking through a desert, dressed in bold, luxurious outfits. The contrast between the wasteland and their colorful clothing sparks curiosity over how the members found themselves there in the first place.

Moreover, all members look forward determinedly, besides Chaeryeong, who offers a fierce glance at the camera. Their firm gazes summons questions regarding their destination, and what goals they have to achieve once reaching it.

Through the image’s contrast between the barren desert and the bright members, ITZY shows a refreshing and vivid concept. The teaser continues to increase fans’ interest in their upcoming release. Their initial comeback announcement with the opening trailer for “Not Shy” has already surpassed an impressive 3.5 million views on YouTube, portraying their fans’ excitement.

ITZY continues to lead the fourth generation girl groups through their hit singles. From their debut song “DALLA DALLA”, to “ICY”, to their latest release “WANNABE”, the young group has asserted their strength in hit, catchy title tracks combined with strong visual concepts. As such, fans anticipate the group will continue proving their strengths with their newest comeback, revealing a powerful song to match its teaser image.