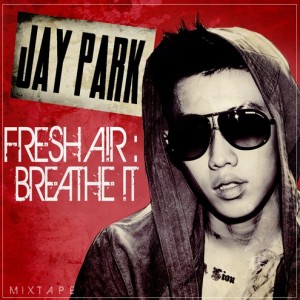 Jay Park has become the first Asian singer to receive the Gold title on Datpiff for his original mix tape, as demand for his self-written works increased. On the 20th of July, Jay Park’s company Sidus HQ revealed that Jay Park’s mix tape FRESH A!R:BREATHE !T had surpassed the 100,000 mark in downloads, attaining the status of  ‘Gold’ on Datpiff; America’s biggest mixtape site.

Many American hip hop artistes create mix tapes, a compilation of songs created by mixing other songs together, and release them via the site. Park has become the first Asian singer to receive the Gold title, his mixtape ranked above internationally known artists such as Kanye West, Lil Sean and 50Cent in the fierce competition online. What makes this achievement all the more outstanding is that no advertisements were made prior to the release of the album.

Jay Park created the album and released it free for everyone as a show of appreciation towards his fans. The album is titled BODY2BODY and includes 6 songs: title song BODY2BODY, Be With Me 2Night, Do What We Do, Hopeless Love, William Hung, You Know How We Do.

“He has become cooler, being adventurous in his music.”

“I tried listening to the mixtape and really liked it.”

“Jay Park, your music is great.”

In related news, Jay Park will kick-start his tour ‘New Breed Asia Tour’ with the first concert on the 18th of August in Seoul Olympics Hall.

Hellokpop, as an independent Korean entertainment news website (without influence from any agency or corporation), we need your support! If you have enjoyed our work, consider to support us with a one-time or recurring donation from as low as US$5 to keep our site going! Donate securely below via Stripe, Paypal, Apple Pay or Google Wallet.
FacebookTwitter
SubscribeGoogleWhatsappPinterestDiggRedditStumbleuponVkWeiboPocketTumblrMailMeneameOdnoklassniki
Related Items50centBe With Me 2NightBODY2BODYDatpiffDo What We DoFRESH A!R BREATHE !THopeless LoveJay ParkKanye WestLil SeanNew Breed Asia TourSidus HQWilliam HungYou Know How We Do
← Previous Story Kim Hyung Jun releases drama MV teaser for Bad Guy
Next Story → LOEN artists to collaborate for project album