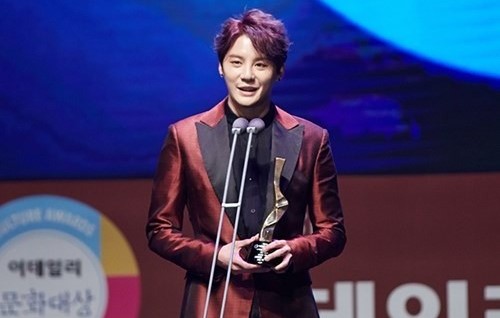 Junsu won the honorable trophy for his musical work ‘Death Note’ at the “2016 Edaily Culture Awards.”

With excellent singing ability, Junsu is considered as one of the best vocalists in the Korean music industry, gaining a foothold in fans’ hearts.

Besides being a part of the trio JYJ, the heartthrob also expresses his unique color in the musical theater scene. The musical work Death Note, which was chosen as the best musical of the year, is a testament to his artistic talent and intense efforts for a long time.

At the awards ceremony’s stage, the celebrity could not hide his happiness, saying:  “I am honored to be given such a grand prize. I want to share this glory with all the staff members and actors who starred in Death Note.”

In related news, Junsu will be holding a ballad and musical concert, titled 2016 XIA THE BEST BALLAD SPRING TOUR CONCERT vol.2 in JAPAN in Nagoya and Tokyo next month.

Check out the clip below: