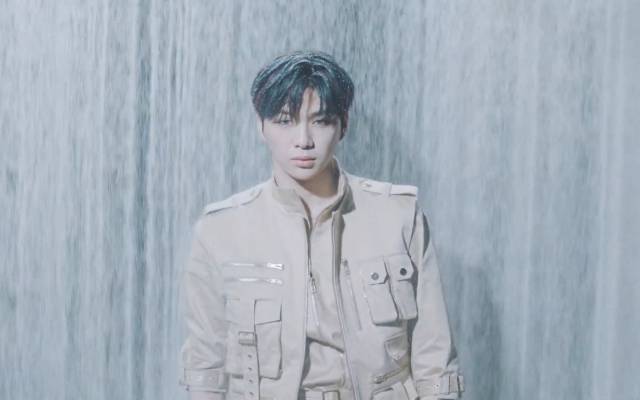 Kang Daniel brings forth a vibrant set of tunes with his colorful comeback album MAGENTA!

Kang Daniel has released his much awaited comeback album MAGENTA and he surely brought in a splash of summer with refreshing new sounds.

With this latest release, Kang Daniel expresses his journey of finding the color of his own path. 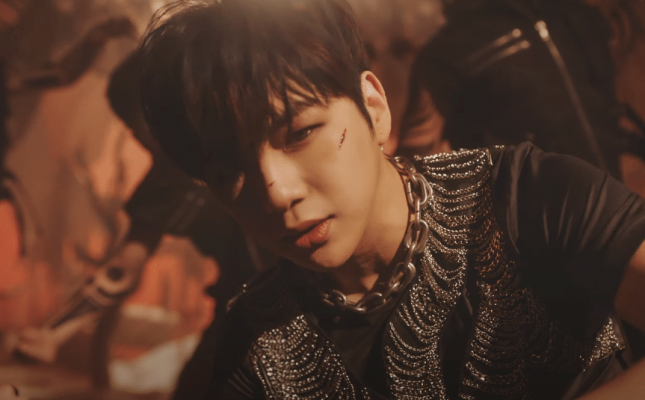 What started with a cool and relaxed CYAN is now bright with passion on MAGENTA. From the intensity of the gleams of the sun to its surrounding warm light, the beginning and end of this summer are all contained in the mini album itself.

Kang Daniel hyped fans up when he announced his comeback mini-album on his official SNS on July 5. And to amplify the excitement, he further dropped an album teaser on the same day as well.

The teaser showcased a clip of his logo from his first mini-album CYAN transforming into two circles from its original three while the background morphed to the color magenta.

Next on July 8, the singer got fans marking down the important dates leading up to his mini-album release as he unveiled a bright schedule poster.

Kang Daniel got DANITY buzzing with elation after he revealed the awesome line-up of songs on MAGENTA that also features some of K-Pop’s biggest names such as Simon Dominic, Jamie, YUMDDA and DVWN. 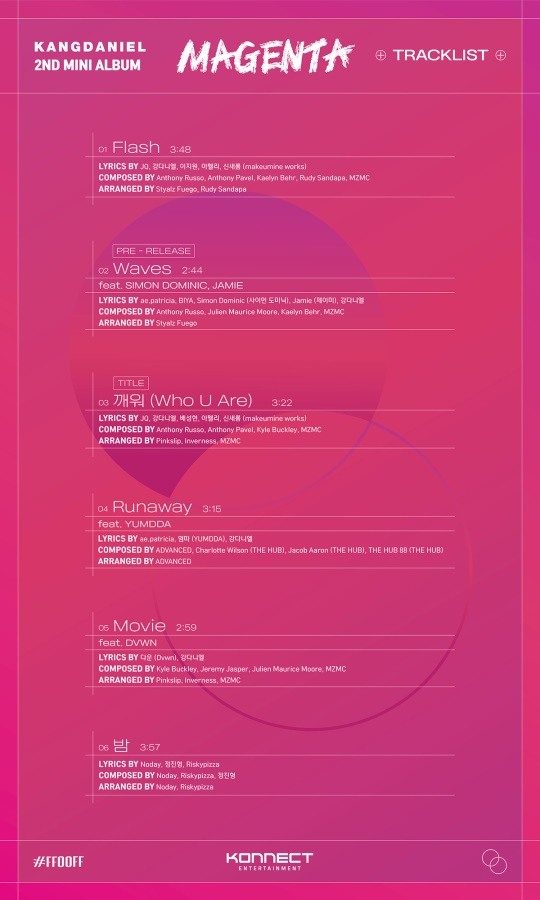 On July 20 and 22, the multi-talented musician took fans’ breaths away as he revealed concept images that showed Kang Daniel looking like a king in his regal attire, exuding a bold bearing. 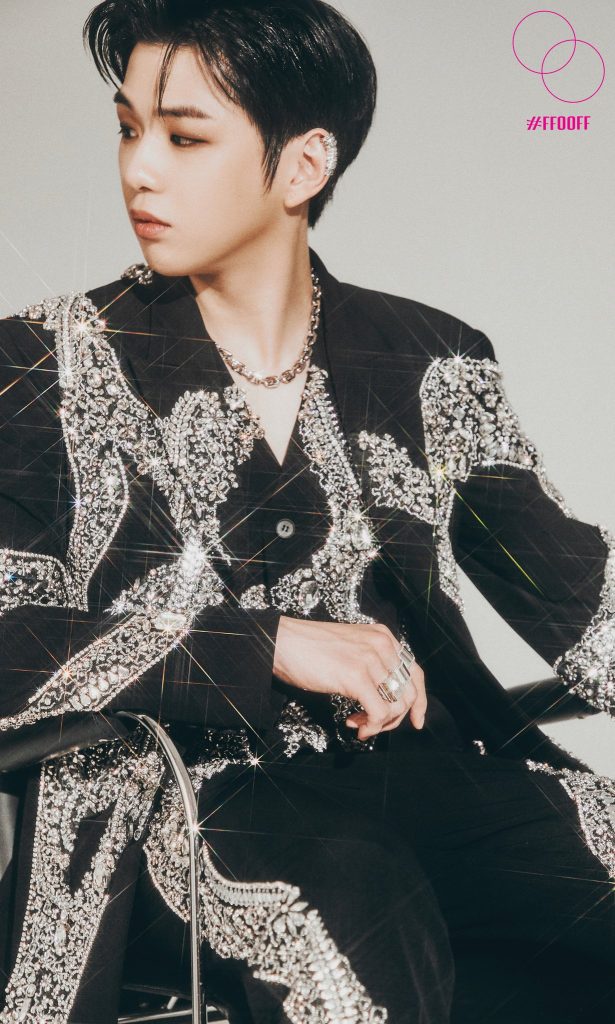 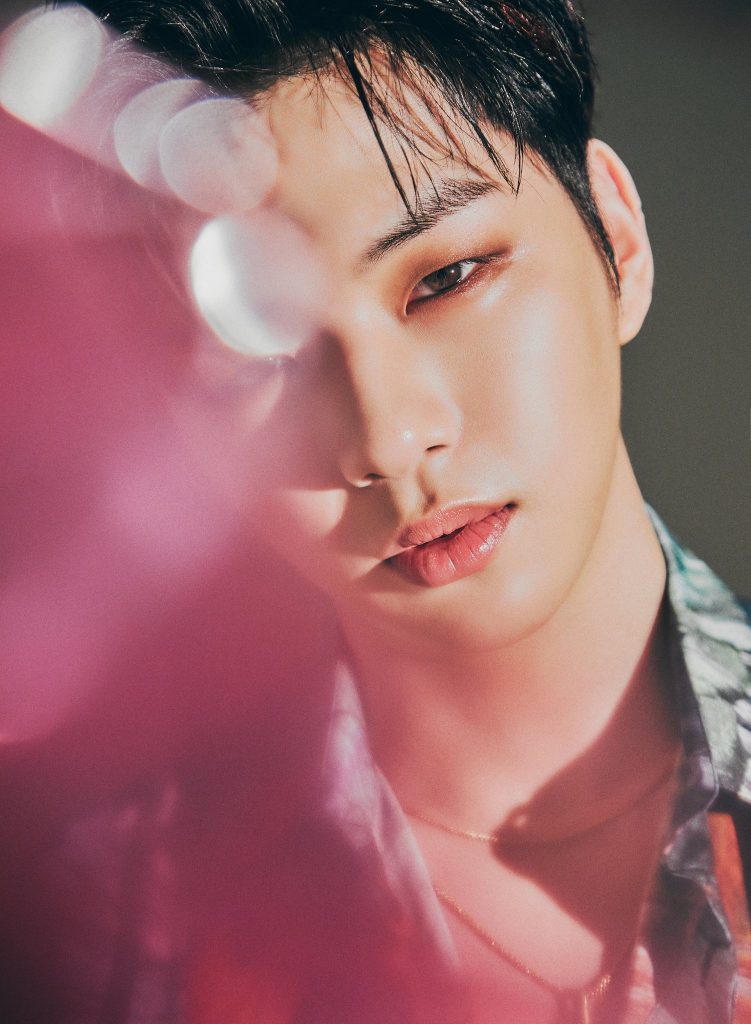 Kang Daniel gave a sneak peek into his album with a pre-release single titled, “Waves”. The vocalist piqued fans’ interests after he unveiled a mysterious teaser image for the same on his official SNS. 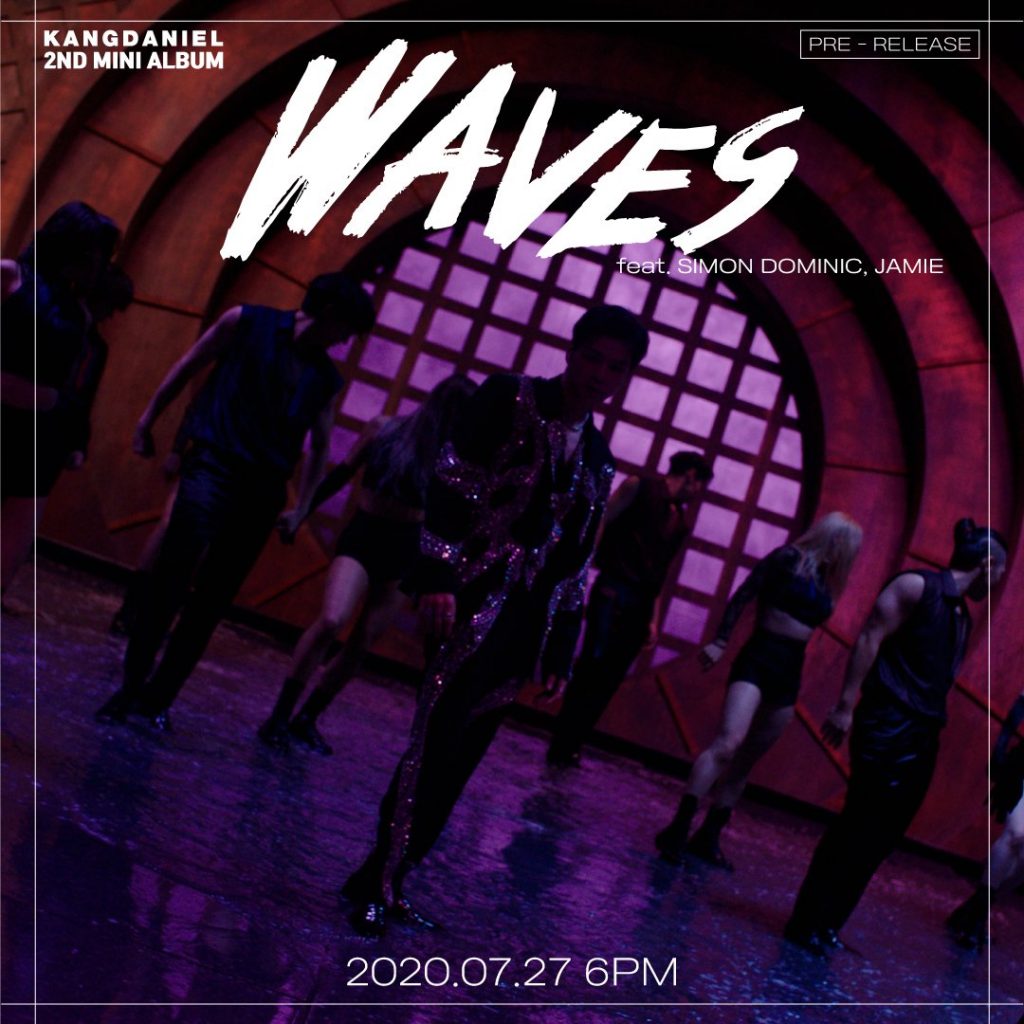 The artist then went on to showcase a captivating and cleverly designed highlight medley on July 24.

Kang Daniel then made a spectacular splash with the official release of his single “Waves” on July 27. The stunning music video also features artists Simon Dominic and Jamie as well.

With only a few days to go for his comeback album to release, Kang Daniel intensified anticipations as he unveiled official teasers for MAGENTA’s title track “깨워 (Who U Are)” on July 29 and 31 respectively. 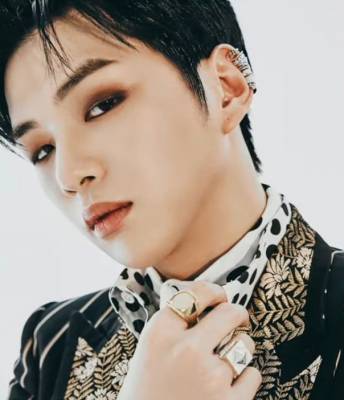 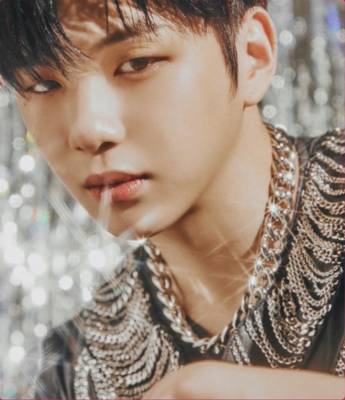 The young artist truly impresses with his suave sounds and all round melodies. MAGENTA is an album filled with total bops showcasing the ever evolving musical caliber of the singer.

Opening the album on an ambient note, Kang Daniel’s vocals are sure to hit listeners like a lightening bolt on his track, “Flash”. His soft voice is resonating and sweet as he harmonizes his vocals with the heart thumping melody marvelously. 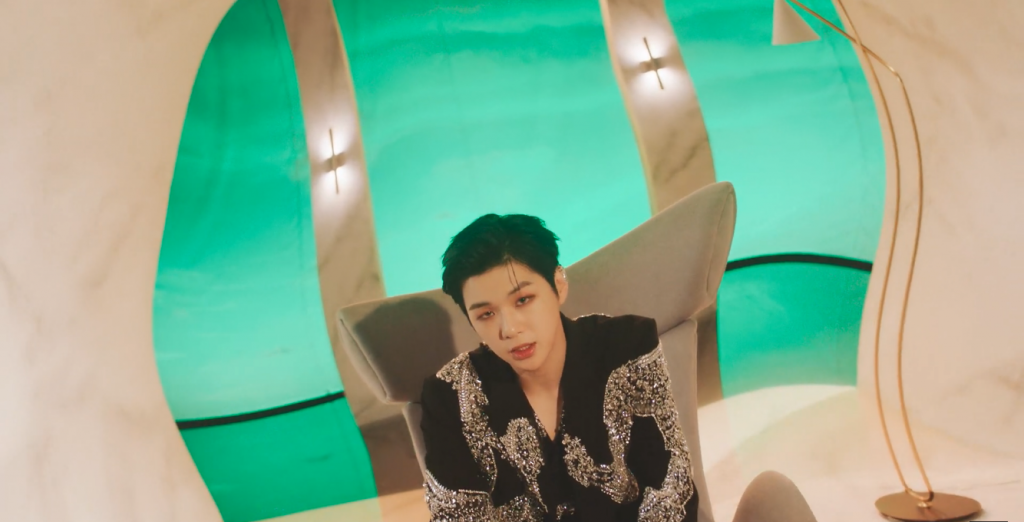 Next, “Waves” comes in strong with its fresh style due to its 808 bass, drums, Latin guitars, and staccato piano sound based composition reflective of dance hall and hip-hop genres. The chorus steals the spotlight on this number especially due to the beautiful and effortless blend of Kang Daniel and Jamie’s voices, while Simon Dominic lights up the ambiance with his blazing rap verses.

The song expresses the emotions of putting all your faith and trust in letting one’s heart follow like the waves that move in their direction. This is undoubtedly a track that makes listeners want to sing along, get up, and dance to it. 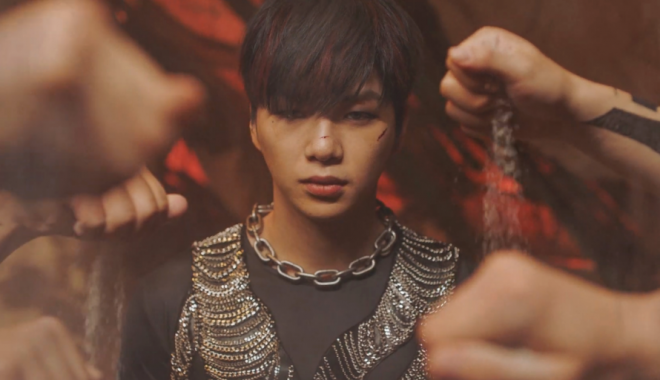 Kang Daniel is sure to sweep listeners off their feet with his thrilling title track, “깨워 (Who U Are)”. The word dynamic finds its definition in this track for sure. The composition of the 808 bass drum, Latin guitar, flute, synthesizer and vocal effects create a addictive melody that captures the essence of summer perfectly.

“깨워 (Who U Are)” is a song with lyrics that talk about awakening hidden emotions. Akin to the burning sun, there is power and passion that surges within every beat in the song.

“Runaway,” is a fast paced electro pop track with reggae influences that features artist YUMDDA alongside the sweet toned soloist. This track is hands down one of the shining stars of the album.

Kang Daniel’s soft voice sounds so mesmerizing that its creates quite a magical atmosphere. YUMDDA brings in this playfulness in the track with his sassy style. The best moment unquestionably is the bridge with Kang Daniel’s flawless high note right before the catchy chorus towards the end. All in all, the song is downright stunning from start to the end. 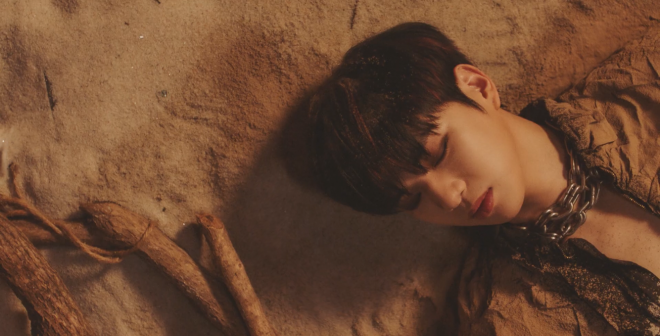 Giving off major R&B meets hip-hop vibes is the album’s grooviest number “Movie” that features artist DVWN who opens the track with his smooth, breathy falsetto before Kang Daniel brings a burst of fresh energy with his husky tones. The lyricism is romantic and talks about a love interest they can’t seem to get their minds off of.

However, towards the end, the lyrical styles becomes somewhat tongue in cheek. This is seen in lines such as, “Sweet Movie/ It’s a sweet movie (Girl, together with me)/ A movie that has been climaxed all night long/ I’m going to go through all the hidden mise en scène all night/ Movie, who spent the whole night in the climax.” Overall, this track exudes a chill vibe that is elevated with the hard-hitting bass and the unrivaled combination of Kang Daniel and DVWN’s vocals.

“밤 (literal translation: Night)” is a heartwarming, slow paced song that features breezy guitar riffs and soft bass and snares that fit like a dream with the singer’s honeyed voice. Kang Daniel shows so much versatility in this track with his pristine falsetto and breathy notes.

This track comes straight from the heart and expresses sincere longing for a dear one. The vocalist channels the very essence of this emotion beautifully. This song is one that will melt hearts and keep listeners coming back for more singing,  “I just wanna be with you”!

“I’m gonna blow your mind” – the very lines that foreshadow exactly what Kang Daniel does throughout this music video!

It is hard to tell between what the fantastic elements of the video are as each and every detail is nothing short of being spectacular . The singer is bound to leave viewers speechless with his showstopping visuals and the cinematography with the power packed choreography is captivating enough to make people stop all that they’re doing and get lost in Kang Daniel’s kingly charisma.

The music video is compelling, majestic and magnetic, and it is truly everything that embodies all that is MAGENTA.