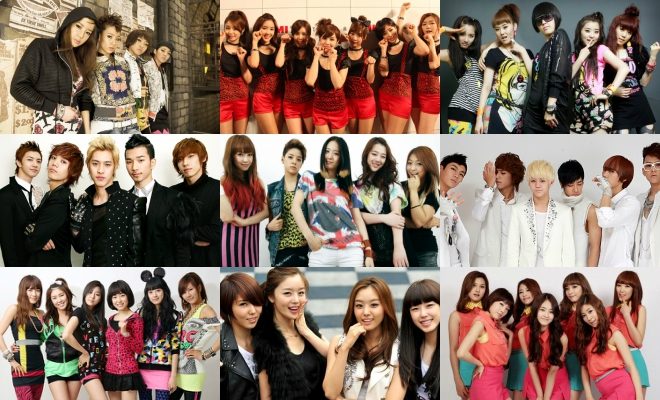 Yes, these K-Pop groups are turning ten this 2019!

Time surely flew fast as these K-Pop groups will celebrate a decade into the K-Pop industry this 2019. Although most of these groups are currently on hiatus or have officially disbanded, we look back on their start as we remember their debut in the year 2009.

Dara, Bom, CL, and Minzy officially made their group 2NE1 known to the K-Pop world on May 17, 2009 when they held their first performance of their debut single “Fire” on SBS’ Inkigayo.

“Fire” is the lead single of the girl group’s first self-titled album. It was written and produced by YG Entertainment’s resident producer and 1TYM’s Teddy Park. Since then, Dara, Bom, CL, and Minzy were recognized for their uniqueness and distinct style in terms of music and fashion.

Although they have since disbanded, 2NE1 will remain to be one of K-Pop’s most successful and influential girl groups in its history.

The girls went on to release two studio albums, one compilation album, two video albums, and seven extended plays. They also participated in six soundtrack albums including “Welcome to the School” for School 2013.

Following their contract expiration in 2016, Ji Hyun, Ga Yoon, Ji Yoon, and So Hyun decided to part ways with Cube Entertainment. Hyuna is the only member who re-signed with the agency, but ultimately left the company in 2018. As the members have signed with different agencies, Cube Entertainment has disbanded the group in 2016.

Because the group follows a graduation system, all of its original members have left the group and pursued their own careers. As of press time, Pledis Entertainment has yet to make announcements regarding the comeback of the girl group or its future plans. The remaining members of the group are Raina, Nana, E-Young, and Kaeun.

The boys also promoted another single from the EP titled “Mystery” in 2010 wherein they created their own music video featuring fellow artists Girls’ Generation and KARA.

However, the year 2016 saw member Jang Hyun Seung depart from the group. As a five-member group, BEAST went on to promote “Butterfly” and “Ribbon” from its album Highlight.

The same year, the remaining five members officially left Cube Entertainment and set up their own agency called Around Us Entertainment. Because of copyright issues, Doo Joon, Jun Hyung, Yo Seob, Gi Kwang, and Dong Won cannot use their group name BEAST, leading to them adapting the name Highlight instead.

At present, leader Doo Joon has enlisted in the military with other members expected to follow. Still, among all the acts on the list, BEAST, now Highlight, remains the most active as a group.

f(x) began its run as a group in September 2009 with the release of “LA chA TA”. Originally made up of Victoria, Luna, Amber, Krystal, and Sulli, the girl group held its first broadcast performance on September 5 via MBC’s Music Core.

Since 2009, f(x) has released four full albums, two mini albums, one repackaged album, one video album, and a physical single in South Korea. Additionally, the girl group has come out with two physical singles in Japan.

The girls have also made various original soundtrack appearances. They have also released solo songs. The members have also ventured on solo careers both in music and acting.

f(x) is now a four-member group following Sulli’s departure in 2015. However, since 2016, the girl group has yet to make a comeback.

MBLAQ, which stands for Music Boys Live in Absolute Quality, was created by Asian superstar Rain in 2009 under his then record label J.Tune Camp.

In 2014, MBLAQ became a trio following Thunder and Lee Joon’s departure to focus on music and acting, respectively. As a trio, the boy group came out with the mini album Mirror in 2015.

Rainbow was a girl group under DSP Media made up of Woori, Seung Ah, Jae Kyung, No Eul, Yoon Hye, Ji Sook, and Hyun Young.

The girls released their debut extended play Gossip Girl with a song of the same title as its title track on November 12. Prior to the EP release, a music video of “Gossip Girl” was unveiled on November 9.

Rainbow has filled its discography with five extended plays in South Korea and two studio albums in Japan.

After seven years under DSP Media, all members of Rainbow decided to leave the company, resulting in the official disbandment of the group. Despite threading separate paths, the members remain close and often hang out together to celebrate special occasions.

They kicked off their career with the single “I Want You Back”. However, this was met with poor commercial performance. It was in 2010, with the release of “Magic” and “Madonna”, that the girl group received considerable attention. The songs peaked at the number two and one spots, respectively, of Gaon Chart.

The girls followed up these successes with another hit, “Shy Boy”, which earned them their first win and triple crown.

After two studio albums, six extended plays, and 16 singles, Secret disbanded with Sun Hwa leaving TS Entertainment in 2016 to focus on acting and Hyo Seong and Ji Eun in dispute with the company for violation of contracts.

T-ara’s breakthrough success came with the release of the single “Roly-Poly” from the group’s John Travolta Wannabe EP.

With the group’s successful releases in South Korea, Japan, and China, it has earned its position as one of the most successful girl groups in K-Pop.

As of 2018, all members of T-ara have left MBK Entertainment although no official announcement regarding disbandment has been announced.