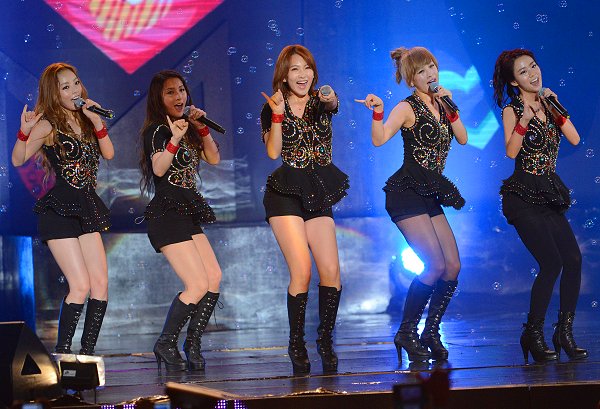 On November 28, Hara unveiled her cute and bubbly music video for the track SECRET LOVE. Goo has dual roles in the music video as she plays a love-struck girl who is interested in another girl’s boyfriend whilst taking on the role of the girlfriend.

On the same day, Nicole also released her music video for LOST featuring 2AM‘s Jinwoon. Her music video has a mature ambiance as she is seen at a club. The video displays flashback scenes of Nicole and her boyfriend, but she is eventually left alone in the end.

On November 30, Jiyoung released a music video for Wanna Do, Gyuri unleashed Daydream, and Seungyeon unveiled the video for Guilty.

Maknae Jiyoung’s music video is very simple and innocent. She is seen looking at an old guitar which brings her back to the day when she was contemplating about whether she should purchase the certain guitar. However, when she finally decides, a man purchases the guitar first and they end up becoming friends. In the end, he is unable to be with her and writes ‘love’ on her guitar.

Following Jiyoung’s music video, Gyuri released the video for Daydream. The song includes an orchestral sound that adds mystery to the eerie video. Gyuri is strapped down by two men who are distinguished by their contrasting black and white coat.

Seungyeon was the last to unveil her video for Guilty. The song has a pop-rock sound and instead of a cute or sensational appearance, Seungyeon goes for a charismatic concept and performs as the vocalist of a band.

What did you think of each the MV’s? Check out the music videos for KARA’s solo tracks below: