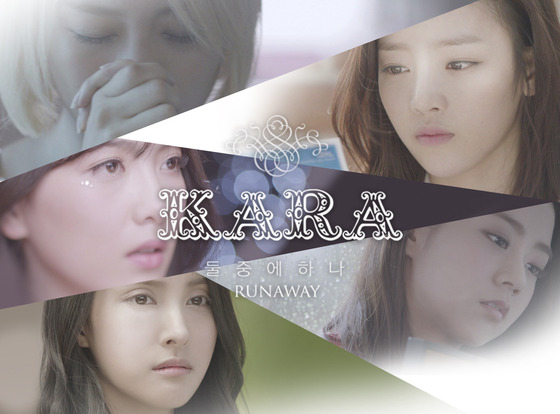 After revealing their masculine concept on the jacket image, the members of KARA pre-released their track titled Runaway on August 21. At the same time, DSP Media also released the music video on KARA’s official YouTube channel.

Based on the music video’s description, Runaway is a medium tempo blues song that talks about the heart of a woman who decides to let go. The music video shows the cuts of KARA’s upcoming drama Secret Love. In the music video, the girls are in a dilemma because of their lovers who is already gone. The drama will consist of five episodes featuring KARA members and the leading actors. It will be aired on KBS this September.

Fans are anticipating the drama because the cuts in the music video seem interesting. Moreover, fans caught a glimpse of Lee Kwang Soo in the music video. They also had positive comments about the song because of KARA’s first try at medium tempo blues music.

Hellokpop, as an independent Korean entertainment news website (without influence from any agency or corporation), we need your support! If you have enjoyed our work, consider to support us with a one-time or recurring donation from as low as US$5 to keep our site going! Donate securely below via Stripe, Paypal, Apple Pay or Google Wallet.
FacebookTwitter
SubscribeGoogleWhatsappPinterestDiggRedditStumbleuponVkWeiboPocketTumblrMailMeneameOdnoklassniki
Related ItemsDSP MediaGoo HaraGyurijiyoungKARAmusic videoNicolerunawaySecret LoveSeungyeon
← Previous Story Teen Top releases teaser video for ‘Rocking’
Next Story → W&JAS releases mini album ‘New Kid in Town’