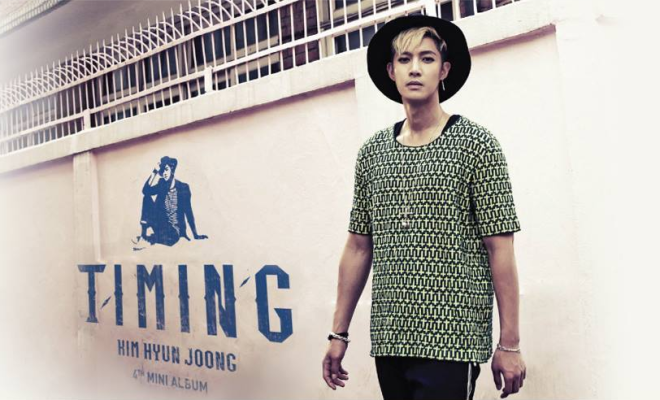 South Korean singer and actor Kim Hyun Joong is coming back with a 4th mini album called Timing. KEYEAST Entertainment has recently released a teaser video on the artist’s YouTube channel and a teaser photo on the official Facebook page.

The mini album consists of 4 songs and an instrumental version of the track Beauty Beauty.The album includes the songs His Habit, Beauty Beauty, Nothing On You and Words I Want To Say. The song His Habit has a feature from South Korean artist Kim Ye Rim of Togeworl and Kanto.

KEYEAST officials have asked for fans to anticipate and show a lot of interest in Kim Hyun Joong’s new album as it shows a unique combination, as they state that “Kim Ye Rim and Kanto’s charming voice and rapping featured in His Habit led to the production of a more sentimental album.”

It has been a little less than a year since his Kim Hyun Joong’s last comeback, Round 3, and he has also recently finished filming KBS drama Inspiring Generation. Fans are eager to see the artist promoting more through live broadcasts and hopefully more appearances on variety shows.

Kim Hyun Joong has also pre-released the song His Habit. It is an urban hip-hop song and is available on iTunes right now.