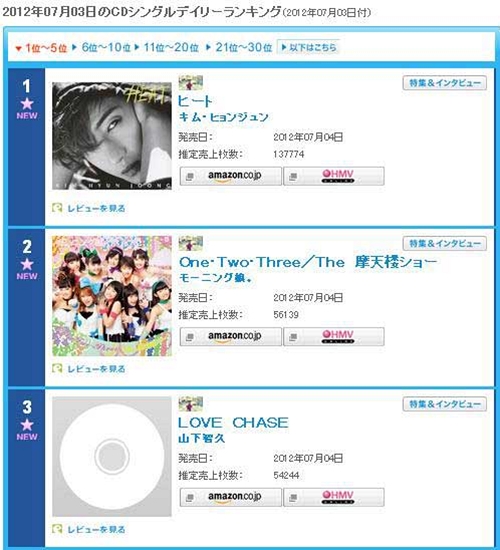 Kim Hyun Joong has emerged to first place on the Oricon charts upon the release of  his second Japanese single, HEAT on July 4.

Oricon calculated that Kim had sold a total of 137,774 albums on the day of release, which was more than double the amount of second place Morning Musume with 56139 albums sold, and third place Yamashita Tomohisa with 54244 albums sold.

In honor of his successful album, Kim will be holding another handshake event on July 7 in Osaka.

Hellokpop, as an independent Korean entertainment news website (without influence from any agency or corporation), we need your support! If you have enjoyed our work, consider to support us with a one-time or recurring donation from as low as US$5 to keep our site going! Donate securely below via Stripe, Paypal, Apple Pay or Google Wallet.
FacebookTwitter
SubscribeGoogleWhatsappPinterestDiggRedditStumbleuponVkWeiboPocketTumblrMailMeneameOdnoklassniki
Related ItemsHEATKim Hyun JoongMorning MusumeOriconOsakaYamashita Tomohisa
← Previous Story NU’EST reveals MV teaser for ‘Action’
Next Story → Yim Jae Bum releases teaser for upcoming 6th album