From August 15, Kwon Eunbi started revealing clips of her new songs which will be featured in the artist’s first mini-album OPEN. So far, the idol revealed two of the songs, presenting a reverse charm in the two clips. 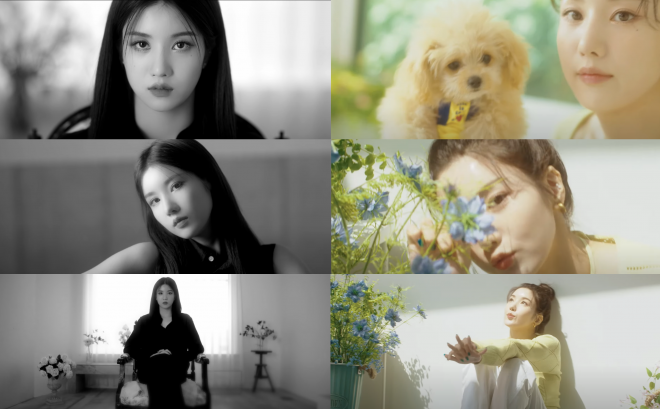 The first snippet unveiled was for “Amigo”, a song with a Latin mood. The upbeat piece heralds an addictive music number that will be loved by many. In the black-and-white video, Kwon Eunbi showed a chic look and captivated the eyes with her beautiful visuals.

The second song that the artist revealed revealed was the more relaxed “Eternity”. Compared to the previous clip, this one presented a more gentle and softer atmosphere, with bright colors. The artist matched the mood by posing with either a cute little puppy or by various pretty flowers.

It is yet to be revealed if either of those songs will be the title track of the new album or not. Regardless, the idol is already drawing attention for her new works, raising curiosity about the full versions of the music numbers.

More teasers will continue to follow and to reveal more details about Eunbi’s solo debut. She will showcase her outstanding dancing and singing skills once again in this new beginning.

Kwon Eunbi plans to release her first mini-album OPEN on August 24 at 6 PM KST. This will put a start to her new challenge as a solo artist.