Enter into a new world alongside Kwon Eunbi with her beautiful music video teasers.

Kwon Eunbi has unveiled which track will be the star of her new album in latest teaser videos. The artist also delivered a lot of spoilers to hype her fans, hinting at colorful genres to fill her first mini-album. 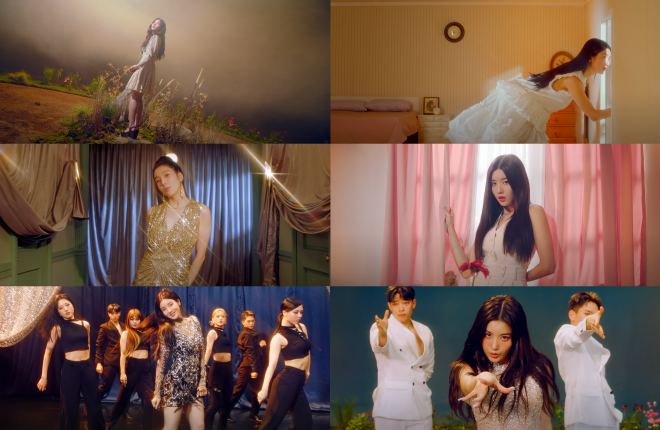 On August 21 and 22, Woollim Entertainment revealed the two music video teasers for Eunbi’s new title song “DOOR”. In the first clip, fans can find the idol in an unfamiliar space for them, looking around confused. After a moment, she opens a door and enters another area, showing a complete change in her demeanor.

Meanwhile, the second clip focused on showing glimpses of the choreography for the song. The artist shined in her sparkly dress, attracting attention with the upbeat song. In addition, the video once again showed shots of her lost self, roaming around.

The white rabbit ears and the door, which brings the idol to another place, give off Alice in Wonderland vibes, raising questions for the concept of the music video.

Previously, Kwon Eunbi dropped various image shots that presented a different charm, starting from pure and innocent, to chic and classy looks. Later, she shared lyrics photo teasers, along with music track videos for each of the songs on her new album.

In addition, the idol revealed a highlight medley for OPEN, giving another taste of her work. The album will include six songs, with “DOOR” serving as its main music number.

Kwon Eunbi will release her first mini album OPEN on August 24 at 6 PM KST, starting her new journey as a soloist.