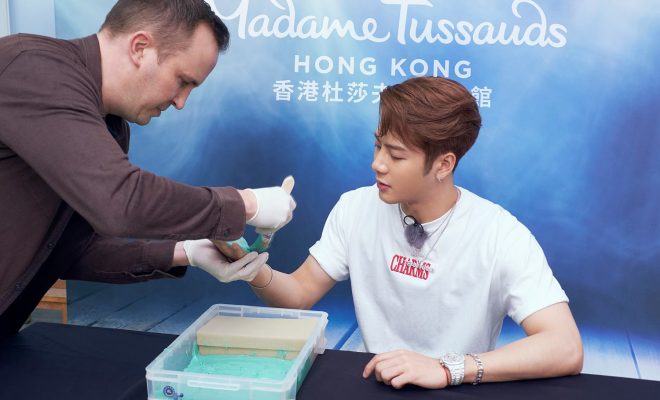 GOT7’s Jackson Wang is getting his very own wax figure in Madame Tussauds in Hong Kong!

Madame Tussauds in Hong Kong dropped behind-the-scene photos of GOT7’s Jackson prepping for the making of his wax figure on December 17!

In the released photos, the GOT7 member was shown going through the sitting process needed for the making of his wax figure to be showcased in Madame Tussauds Hong Kong. The singer-songwriter gamely and enthusiastically held different tools and materials and displayed different poses as well.

Madame Tussauds had nothing but praise for Jackson’s patience and positive attitude all throughout the process. “To keep himself in top condition, he refrained from eating during the whole process. Not only does he have a strong work ethic, but he is also eager to learn and considerate,” they shared, noting that the process lasted for six hours.

“After getting his measurements taken as requested by the team, he asked the staff to teach him about the wax figure making process, and even asked if they were tired after small sections of the work were completed. He won over the staff and they had nothing but praises for him,” they added.

Besides being an idol, Jackson – who was born and raised in Hong Kong, had also made himself a significant name in his country after being proclaimed the Hong Kong Tourism Envoy this year.

Jackson was also a guest host at the 2017 Asian Music Gala and won the MTV Special Award. In the same year, he showcased more of his talents to the world by releasing his electronic hip-hop singles like Papillon and FENDIMAN.

In 2018, he was awarded The Most Popular Newcomer of The Year at the Global Chinese Golden Chart Awards and took home the Choice Next Big Thing title at the Teen Choice Awards. This year, he also became a celebrity with the most Asian followers on Instagram, bringing him yet another step closer to his dreams.

Madame Tussauds recognizes these feats by Jackson, who had dreamt of having his own wax figure made since visiting Madame Tussauds Hong Kong with his parents when he was nine years old.

“Having his world’s first wax figure at Madame Tussauds Hong Kong has special significance to both Jackson and the attraction,” the company noted.

“This young gentleman has a strong passion for music and works hard to achieve his dreams; we are very honoured to have him,” the General Manager of Madame Tussauds Hong Kong, Jenny You, also said.

The wax figure will be personally revealed by Jackson around mid-next year.

What are your thoughts on GOT7’s Jackson’s dream come true? Let us know by leaving a comment below, giving us a holler on Facebook, or tweeting us at @hellokpop!