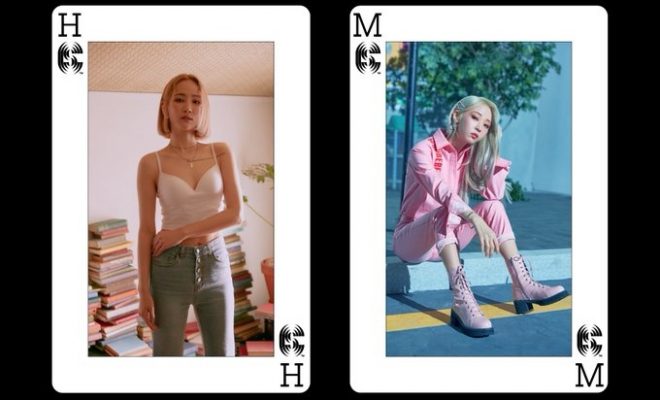 This August, HA:TFELT and MAMAMOO’s Moonbyul are teaming up for a unique release! The two have been brought together by Amoeba Culture’s newest collaboration project, which aims to pair up artists from different genres.

As part of Amoeba Culture’s “Code Share” project, HA:TFELT and Moonbyul will be releasing a single titled “Happy Now”. The agency teased the collaboration through social media, posting a photo featuring the song title and images of the two artists.

Prior to this collaboration, the two also teamed up in MBC’s The 1st Place Now Is?. In an episode aired in May, the pair performed a cover of Park Mi Kyung’s “The Warning of Eve”, where they were later recognized as the best performance. Given their fiery show here, it is easy to see why their fans are itching to hear their upcoming collaboration.

HA:TFELT, the current stage name of Wonder Girls alumni Yeeun, made her debut as a soloist with the single album, Meine. Her upcoming collaboration with Moonbyul comes in a year and three months after her most recent single album titled Deine.

Moonbyul, meanwhile, debuted with MAMAMOO. Alongside Wheein, Solar, and Hwasa, the group rose to fame with hits such as “Um Oh Ah Yeh”, “You’re The Best” and “gogobebe”. They are set to compete in Mnet’s Queendom, a competition show that will revolve around six artists competing for spots on the music charts.