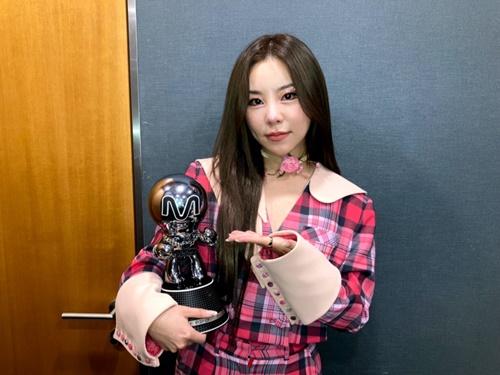 MAMAMOO’s Wheein Scores First Win After Debuting As A Soloist

Wheein took home her first music broadcast win since debuting solo. During Mnet’s M Countdown episode on January 27, the artist scored her first-place trophy with her newest title song, “Make Me Happy” from her second EP, WHEE. The award reflects her growing popularity as a soloist and is the first win of her latest comeback.

Since her first solo single in 2018 titled, “Easy”, Wheein received immense support and praise from fans for her independent projects. Since then, the singer, who is most known for her music in the popular K-Pop group, MAMAMOO, also highlighted her own unique colors with her various solo endeavours.

After winning her first music broadcast, the artist thanked fans through her agency, THE L1VE. Wheein stated, “Thanks to the staff who worked hard together, I was able to work happily. I love my members and family a lot. In particular, I will become a person who keeps the valuable award given by our MooMoos in my heart for the rest of my life. I love you.”

The artist celebrates an eventful and successful beginning of her promotional activities for WHEE. She will continue greeting fans with various content, activities, and performances of “Make Me Happy”.